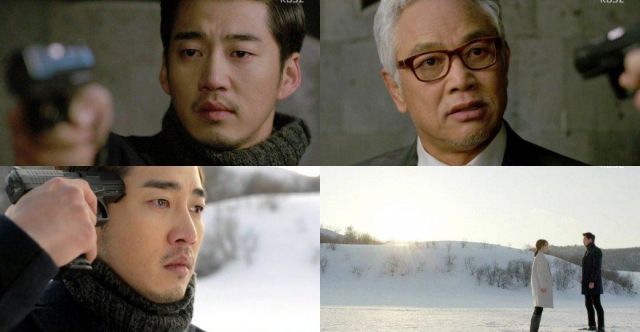 As fun as all this circular emotional grandstanding is, inevitably, something does have to happen in order for "The Full Sun" to actually end. And that something ends up being a chase over documents that are somhow really essential to exposing the fakery behind all the schemes of the drama. I'm not sure what these documents are supposed to do or how any of the characters were able to find them or each other. So the mechanics of that story hook fall down a little flat.

The rest of the drama, though, is as strong as ever. We finally learn what Kang-jae's motivation has been this whole time, and it's pretty disappointing. In some sense the revelation was a predictable one. Se-ro's problems have always gone much deeper than whatever was happening with the con artists at any given moment. And finding that Kang-jae's issues stem from the same source...really isn't that helpful, is it.

I like how right to the end Kang-jae stubbornly insists on keeping to his horribly hateful, cynical ideology. I've never seen a person be so idealistic about cynicism, and yet multiple characters in this drama fall into that cycle. The confrontations only get weaker and more hopeless, to the point that it's a mystery why Se-ro even bothers anymore. It's not like the answer has ever changed before.

The man's just looking desperately for some hope in his life, even as he knows that it's not happening. The symbolism of the gun is pretty inescapable. Note how completely nonplussed every character is by the presence of this literal death machine. There's just this lackadaisical attitude of, look, whatever happens after dying can't be much worse than what we're doing right now, so what's the threat?

It's this backdrop that makes the final scene of the episode so effective. Se-ro is caught in an existential crisis. It's the same existential crisis that he's been in this entire time. And there's only one thing that can snap him out of it- one feeble hope that maybe all of life isn't a total lie, and there's actually some way of recovering and moving on. It remains unclear whether even that will really be enough. Even if Se-ro dodges the immediate crisis, is hope really enough to sustain him indefinitely? "The Full Sun" has always been at its strongest when wringing out despair- so it's difficult to believe even now that we're actually going to get a happy ending out of this.