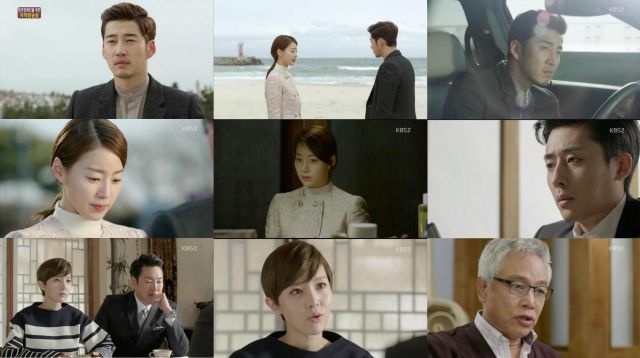 The focus this time is on how terrible Yeong-won's family is. We've had lots of exposition up until now about what a terrible family it is- lots of talk about secret past motivations or stuff that happened off-screen. But it's been falling pretty flat since there's been very little in the actual performances to get across what makes these people so terrible. This episode, all that changes, as we suddenly get a portrait of a family that genuinely doesn't even like each other that much.

It seems kind of silly to me that they've all been putting up this effective facade for what, years? Decades? And it's only now that the con artists show up that they're having trouble keeping it up? If the con artists were needling the family on the emotional end I could buy this turn of events, but Se-ro's the only who's making it personal and he's explicitly putting the plan in danger by choosing to act like this. The guy's charming but from an emotional perspective he's pretty much doing all the work here.

Not that I'm complaining. This episode actually manages Se-ro's conflict regarding both deceit and being kind of agenuine really well. He's projecting a lot of his frustrations regarding his own terrible family on to Yeong-won. If Se-ro wasn't so genuinely angry about his own lousy loved ones these arguments toward Yeong-won simply wouldn't be that convincing. It's terribly appropriate that Yeong-won has appropriated Se-ro's grandmother, lacking any actually halfway decent family of her own to get emotionally invested in.

Of course, the sheer absurdity of that particular plot hook kind of negates the metaphorical impact. "The Full Sun" struggles to deal with its more outrageous high concept plot hooks. I just have a lot of trouble getting invested in the struggles of a bunch evil, questionally competent rich people. It's weird how Yeong-won's family is obviously suspicious of the con artists, yet never just decide to forget it, business requires some degree of trust. Tae-oh seems more worried about possessing his daughter than possessing his money.

Which fit into the greater emotional struggle between Yeong-won and Se-ro, curiously enough. So at the very least "The Full Sun" is doing a good job working up to its strengths. The inevitable romance is actually pretty well sold here, because at this point all Yeong-won and Se-ro talk about is how degrading it is to live without genuine emotional intimacy. That kind of personal conversation goes beyond business or friendship, even if technically that's all that's supposed to be going on.