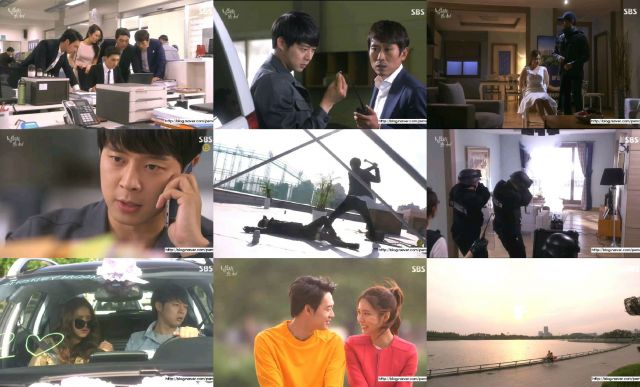 The Jae-hee storyline is finally, definitively resolved by the halfway point. As usual it's loaded with various improbabilities- the ambulance explanation which begs more questions than it does answers. The way the story quickly forgets its own epilogue which stated most of the characters aren't actually police officers anymore. And the fact that Jae-hee is foiled mostly because his superpower of predicting events perfectly has been turned off.

But I'm really kind of sick about discussing that stuff. Which is somewhat awkward, because with Jae-hee out of the picture the story makes a rather odd turn toward a one-off mystery subplot. Dedicating the last half hour of the last episode of a drama to a one-off mystery is just...well, it's weird more than there being any objective problem with the idea. Usually a story's supposed to build up to the big case, not solve the big case and then jump right back into the little ones.

Thematically, the best way I can process this ending is that Moo-gak and Cho-rim can never escape the obvious crime-solving potential of their general abilities, even if for them daily married life is about the more casual happy things like romantic bike rides. But even here the production team can't help but make continuity errors. How many bikes are there? One or two? How exactly do you even make a mistake like that? They'd have to prepare three different bikes!

"The Girl Who Sees Smells" has been such a convoluted drama that looking back I'm still just not sure how to process it all. Try looking back at some of the original promotional material. We were promised a mostly straightforward crime-solving romantic comedy duo. And while that did materialize sometimes, for the most part the story has been completely wrapped up in the Jae-hee mystery. Then, once that's over with, there's barely even a catharsis.

The last half hour has so little to do with what "The Girl Who Sees Smells" turned into that I halfway suspect it was written way back in the planning stage. So...really, I just don't have any idea what's left to say about the drama at this point. The logic of the mystery has consistently been nonsensical, and the laughs provoked by the romantic comedy end were always at least a little inconsistent. If you've stuck around this long there's nothing too out of the ordinary here. Personally speaking, though, I could have done without watching "The Girl Who Sees Smells".