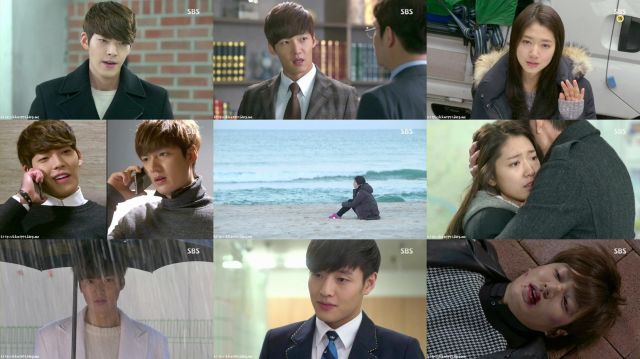 Most of the episode's runtime is dedicated to searching and pining about Eun-Sang. Surprisingly, it doesn't actually take that long for anyone to find her. The main conflict ends up being, all right, provided that we know where Eun-Sang is, then what? The barriers preventing her from getting together with Kim Tan are, as has been thoroughly noted, a lot more dense and problematic than just her staying in a different physical location.

Unfortunately there isn't really much going on here in the way of attacking those barriers. Personally, I have no big stake in Kim Tan and Eun-Sang getting back together soon, or even at all. It's more a matter of how the setting of "The Heirs" just has this really great backdrop of corporate battles and backstabbing that could be utilized more, and I'm really just disappointed that it isn't. One business meeting goes in a particularly stone cold direction- now that's the kind of conflict I can get behind.

But almost the entirity of the focus here is just Eun-Sang, Eun-Sang, Eun-Sang. Oh whatever will our main characters do without Eun-Sang. And my immediate response is- what were they doing before she showed up? I liked the basically angry versions of Kim Tan and Yeong-Do. Well, I liked angry Yeong-Do anyway- angry Kim Tan was just scary. Either way, these characters at least caused stuff to happen. For the most part this is a whole episode of nothing.

Still, I have to give "The Heirs" some credit on the emotional angle here. It manages to pull off the whole separation thing convincingly, such that I'm not particularly concerned that next episode is going to come up with some absurd plot device to bring the Kim Tan / Eun-Sang romance back in full force. Mind, the only reason I would worry about that at all is because this drama has done the separation plot so often that it's just gotten difficult to take seriously.

The more relevant question is where the story is going to go from here. The absence of any clear goals coupled with the fact that we know the next episode can't be about Kim Tan and Eun-Sang getting back together, once again puts a giant question mark over the entire narrative direction of the drama. I'll admit that earlier on I found this ambiguity intriguing- but it starts to take on ridiculous proportions when there's only a few episodes and it's impossible to even guess at what a happy ending might look like.

"The Heirs" is directed by Kang Sin-hyo and written by Kim Eun-sook and features Lee Min-ho, Park Shin-hye, Kim Woo-bin and Krystal.