I hope you weren't expecting this episode to have much in the way of plot progress, because there really isn't any. We open up with Ha-ni and Si-kyeong misunderstanding each other because of Jin-ah's scheme, and for the entire runtime this is never cleared up. Technically the storyline reason for this is that Ha-ni has to go visit a special guest star. It's not clear to me whether there was supposed to any storyline significance to this meeting or if it was just killing time for the sake of jokes. All I know is that I didn't laugh.

The writing has gotten sloppy. It's obvious that we're supposed to be transitioning now to making the possibility of a romance between Ha-ni and Hyeon-myeong a serious one, but it's also just as obvious that Hyeon-myeong isn't much of a character in the first place, at least for this kind of storyline. We know that he's been beaten down by the difficult process of finding a job and losing his girlfriend, and that he'll take out his frustrations on other people if the mood's bad enough. 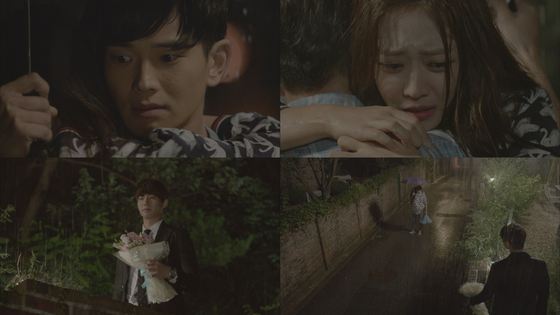 None of this has any sort of relevance to a romance with Ha-ni, so the faint stirrings of a possible relationship we see here seem to come out of nowhere. The only reason any of this is in the script at all is because these are very obvious genre conventions that we would expect to see in this kind of story. Unfortunately, a lot of the appeal in "The Idle Mermaid" so far has been the fact that it hasn't been clearly hueing to these genre conventions.

A lot of my irritation at this point is just a matter of lost opportunity. "The Idle Mermaid" could have been something interesting and unique, and indeed, even here some of the specific plot points regarding the household's plans to find some sort of conventional success have intriguing future possibilities. But most of the screen time is dedicated to character back story that I frankly just don't care about.

Many of these problems could be ameliorated somewhat if the humor was actually funny. For whatever reason, though, I'm just not getting any of the jokes lately. This is most likely because these are references to Korean pop culture that I'm not familiar with. Whether familiarity with these references would make "The Idle Mermaid" more enjoyable I don't know- in any case, given that you're reading an English language review of the drama it's likely you'll face the same difficulties I am.