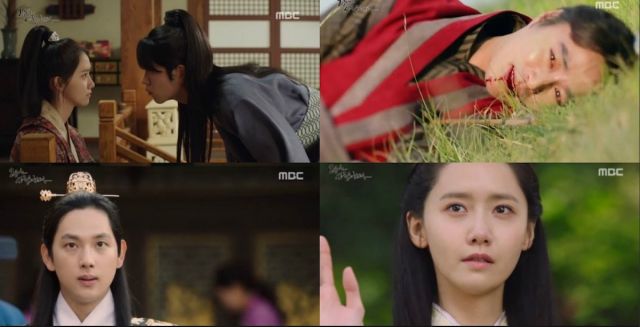 Right up until the last minute, "The King Loves" is as contrived as ever. Because of course Prince Won and Prince Lin are the only two guys who can show up to stop Song-in from finishing her off. Of course one of them gets wounded on the way, forcing the other to confront Song-in on his own. The way they're acting one would think that Song-in was a trained assassin, not a random dignitary whose entire empire collapsed overnight because the queen made an unexpected visit to the king's personal chambers.

King Chungnyeol remains a compelling character at least, from what little we see of him. I did find Prince Won's line about King Chungnyeol not being as mean as he looks to be rather transparently ridiculous. All we've ever seen King Chungnyeol do is make mean-spirited decisions out of spite. Granted, this was because he was being manipulated by Song-in, and King Chungnyeol may have once been a surly, if just and fair king. We just didn't get to see that part.

Which is a real shame. Far more than the love triangle, which felt more periphery the more we saw of it, the real drama in "The King Loves" came from the strained relationship between husband, wife, and son. Really, the whole set up of "The King Loves" is pretty impressively Shakespearean, right down to the vizier character who makes stupid, evil decisions solely out of spite, and succeeds entirely because of his foes' tragic flaws.

And that's what's missing from Prince Lin and San's characters - any sense of their being meaningfully flawed. The presentation of "The King Loves" consistently treated the lousy situations they got stuck in as a matter of unlucky fate. The drama completely failed to acknowledge that Prince Lin or San created most of their own problems, as well as those for Prince Won and his family, by trying to tackle problems all by themselves in a suitably incompetent manner.

By the end there isn't even any kind of romance holding "The King Loves" up. Flashbacks to when the drama was more low stakes offer fleeting glimpses of effective chemistry - and mostly served to remind me that Yoona hasn't really had any chemistry with either of her handsome male co-stars in maybe a dozen episodes. If "The King Loves" had at least managed to pull off a decent romance, it could be considered average, but it can't even do that much in the end.