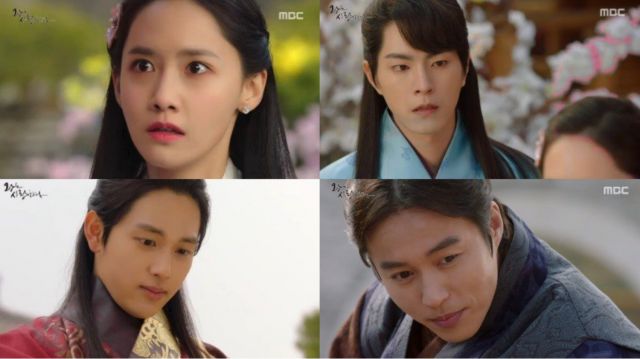 It's a revolving door of favors as "The King Loves" continues to leave me somewhat confused about what the overall actual plot even is. I hadn't even noticed that Eun-san was operating under an assumed identity this whole time, which kind of begs the question of why she was so worried about being caught. After all, the whole point of acting anonymously is to keep from being found by enemies. The flip side being that you also can't be found by friends. Which does seem the stronger weakness, considering how Eun-san and the royal brothers are always bailing each other out of trouble.

"The King Loves" is so completely steeped in subterfuge it's telling I can't figure out who any of the characters actually work for save for the two slapstick idiots who somehow manage to come off as the smartest ones in the whole drama. They have clearly defined goals, and for the most part successfully achieve them. They're also smart enough not to ask too many questions of whoever happens to employ them at any given minute, allowing for maximized screenwriting efficiency.

This is an ironic compliment to make of "The King Loves" to say the least, since the sheer size of the cast frequently requires the use of flowcharts to keep track of the character relationships. And the information we get even from that tedium tends to not be all that helpful, since we're still mostly guessing at any one character's motivation, let alone their immediate goal, and you can just forget about understanding the long-term goals.

The weird exception to this is the central love triangle. All three of the leads act really coy when it comes to flirting, which seems rather off considering how all of them are well past marriagable age. Even the oriental fantasy elements of "The King Loves" can't really get past that, since Chzhuan Muvan Khou's whole character conflict was over being forced into marriage at a young age.

Mind, the same could be said of their maturity. The three leads tend to act like teenagers. This is somewhat worrisome since we know from the title and expanded premise that two princes will eventually becomes kings, and of the two, Prince Lin is the only one with the temperament and intelligence necessary to be a monarch. If Prince Won is headed for a fall, I'd like to see that foreshadowed a bit better than what we're getting right now.