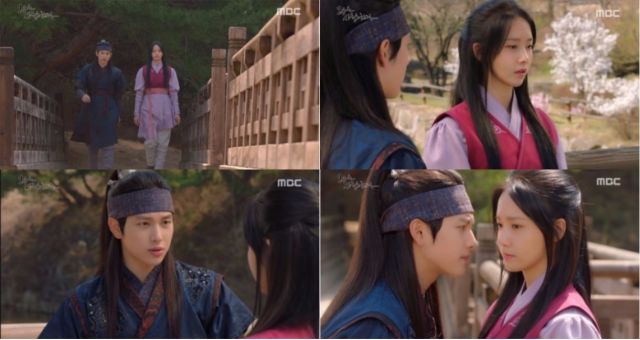 So almost immediately Prince Won gives a pretty complete explanation of what Song-in's plan is and why he went to such pains to set this marriage up. The Eun family's wealth, combined with the royal pedigree of Prince Lin's side of the royal family, are enough to create a private army powerful enough to topple Goryeo. Which kind of begs the question of why King Chungnyeol approved the merger in the first place but then that explanation is quickly answered. Because he's kind of a dysfunctional idiot.

It's also (finally) clarified here that Chzhuan Muvan Khou isn't actually working with Song-in on anything, since we close out on her manipulating the situation in such a way that at least appears to be against Song-in's interests. It is, as usual, a little difficult to tell since Song-in himself has such little screen presence. Although if the royal family is going to insist on self-destructing, it's pretty prudent for Song-in to not be in the way.

I like it when King Chungnyeol and Chzhuan Muvan Khou are in the same room together. It explains a lot about the larger backstory and makes previously incomprehensible scenes largely comprehensible. Of course King Chungnyeol would jump to the conclusion that his son is trying to kill him, since his wife would do the same. Ironically, both parents push Prince Won away because both assume he is a sinister agent working for the other parent against them.

This also explains another plot point that, up until now, had been very vague to me- how Prince Won and Prince Lin are related. They're actually cousins, not brothers, they just act like brothers because they only had each other thanks to parental neglect. Given how their shared surname literally means "king" this confusion was probably to be expected, so my main irritation, once again, is with the production team for making all this exposition so unnecessarily vague in the first place.

We get some legit great scenes here about family dysfunctionality- and more importantly, how the adults tend to be weasels who are willing to bend over backward when a sufficiently powerful person tells them to. I would have liked to see these scenes sooner. The whole scene where Prince Won confronts King Chungnyeol is great. It just feels more like exposition than development. Consider how it's not totally clear if Prince Won actually believes in Song-in's conspiracy, even though it's the main logical explanation, or if he's just giving it his all as a favor to Prince Lin.