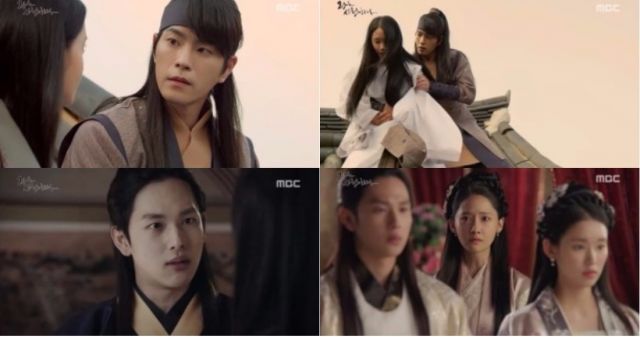 Princess Dan (played by Park Hwan-hee) is the final sibling of Prince Lin and Prince Yeong. She has known and loved Prince Won since he was a child, and he has invited her to the selection process for his consort for the sole purpose of saving her from being offered up as a tribute to the Mongols. I'm not sure Princess is actually her official title but whatever. The nuances of the Goryeo royal family appelations are not really relevant at this point.

Nor is the selection process itself, apparently. I came into these episodes assuming we were going to watch that process play out, and instead we get a very convoluted series of flashbacks which explain more of the elaborate backstory behind the selection process. Once everything has been properly explained, we're right back where we started, and Prince Won rather unceremoniously cancels the entire event.

While I do not like spoilers on general principle, in this case it feels necessary to demonstrate just how bizarrely bad the editing is in this drama. Information is constantly withheld from us for no apparent reason except to create dramatic plot twists when we are belatedly told why certain characters act the way they do. While such scripting is suitable for, say, the mystery genre, it is very frustrating in a traditional drama, which relies entirely on the viewer having empathy with the characters to have any kind of serious emotional catharsis.

And I can't empathize with people if I'm not even sure what they're thinking at any given moment. The way internal miscommunications pops up as a plot point doesn't help matters. I'm still scratching my head trying to figure out whether Prince Won's dramatic pronouncement at the end was made fully understanding all the exposition we learned, or whether certain gaps were not filled.

I mean really, the whole premise seems a bit shaky to begin with. Prince Lin, being Princess Dan's actual brother is the more logical choice to sacrifice himself for Princess Dan over their foster brother. This is especially true considering that Prince Won's consort needs to be someone who could be an effective user of statecraft as the queen. Although, maybe this is why Song-in has such a cynical opinion of the Goryeo power structure. Putting the individual short-term well-being of close friends over the collective long-term well-being of a whole country is, like, the opposite of what a good ruler should be doing.