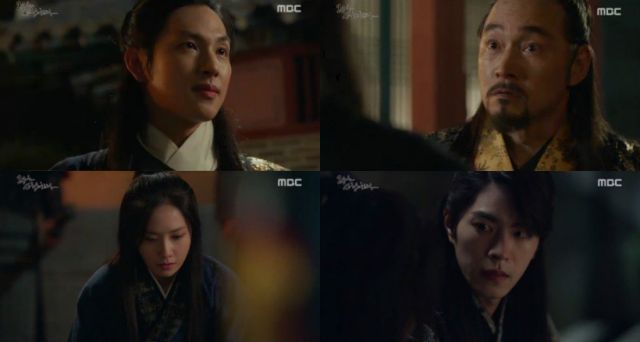 So right away Prince Won and Prince Lin have a conversation wherein they try to parse what exactly just happened at the big selection party. It is only at that point that the lead characters realize that not only themselves, but also San have been acting in a very spitefully noble way, each of them trying to be the most self-sacrificing person. As it turns out, the thought isn't what counts, since by going along with San's plan they have all set into motion a gigantic crisis.

Glad as I am that the characters themselves are finally starting to realize that intentional miscommunication is the main source of almost all of their problems, their ignorance remains frustrating. That San was also a likely Mongolian tribute candidate should not have surprised anyone. Goryeo has to send someone reasonably important to the Mongols or they have no value as a hostage.

But then that all gets sidestepped as Song-in and King Chungnyeol decide that screw the rules, they want money. Which is actually the most logical thing for them to do, considering the stakes of the situation. This does have the unfortunate side effect of turning all the complex negotiations that had been taking place up until that point into a fairly elaborate waste of time, but then again I was never much able to follow this drama's obsession with obscure Goryeo civil forfeiture laws anyway.

It still isn't clear to me why San had to go through the elaborate ruse of having her handmaiden act as a body double while she went to train at the martial arts school, or why shattering this ruse has such dire consequences. I'm also not sure whether San was referring to Prince Lin when she was talking about loving something else, or whether this was just a stupid lie invented to prevent Prince Won from choosing her. Also, does San have any sympathy with Song-in's hopes for a proletariat revolution? Does Song-in himself even believe any of that stuff?

These questions and more remain largely obfuscated by "The King Loves", which remains so obsessed with the drama of its central love triangle that the finer plot points are as usual lost in the shuffle. Mind, it doesn't help that the script is so cryptic. Even with better context that bizarre conversation about the wolfdog is just dialectically confusing, to the point it's hard to figure out what straightforward question Prince Won was even trying to ask in the first place.