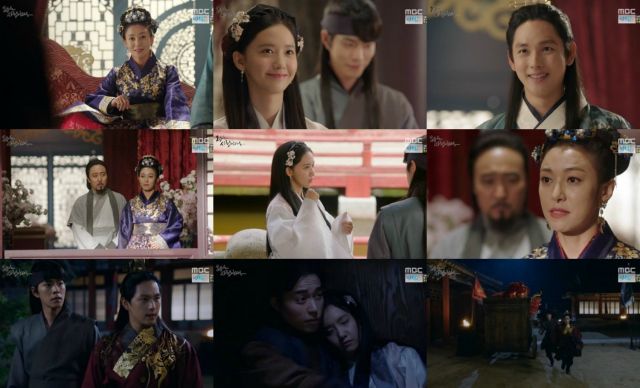 Seong-hyeo (played by Uhm Hyo-sup) is San's martial arts master and ally. He also dispenses advice to the princes every so often. Like most of the characters in "The King Loves", I struggle with understanding Seong-hyeo's relevance to the main plot because as far as I can tell he doesn't have any motivation. He's the kind of guy who gives enigmatic advice like, believe in yourself and your friends.

"The King Loves" has a lot of planning but relatively little doing, and what doing we do get comes off as rather haphazard. But more than that, it's hard to relate to. Song-in's sympathies have been explicitly tied to the lower classes of Goryeo. Even if it's unclear whether Song-in actually sincerely believes the Goryeo monarchy should be brought down for that reason, as of yet no other explanation of his actions is forthcoming.

Contrast that to the heroic efforts our characters make to rescue San and to a lesser extent her father Yeong-baek (played by Lee Ki-young). That lesser extent factor is essential, because as far as I can tell the only reason Prince Won and Prince Lin care about Yeong-baek at all is because he happens to be San's father. Even bearing in mind that San and Yeong-baek probably do not deserve whatever fate Song-in has in mind for them, there's no compelling reason to want any of the main characters to succeed.

So is San, for that matter, although we have time and again seen her engaged in actions of some mild competence. Maybe this is just a bigger issue of how the three main characters in "The King Loves" have too much collective to think of themselves as a team. They just come up with their own plans separately. Sometimes they work, and sometimes they don't. In either case it's hard to get all that engaged in the outcomes when everything comes off as so spur of the moment.