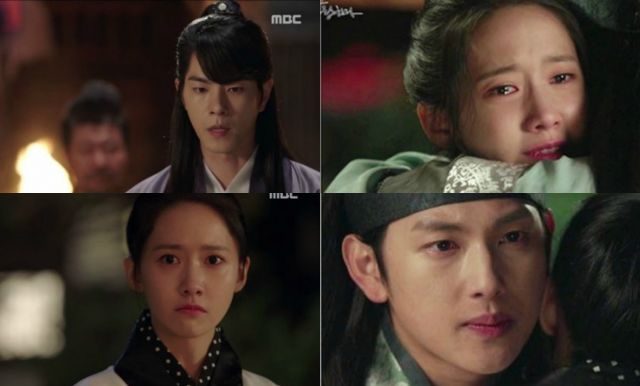 So Prince Won, Prince Lin, and San are all hanging out at Seong-hyeo's place, biding time for their next move. As usual, when the focus is on characterization, "The King Loves" actually manages to be pretty decent. San's cooking is simultaneously basic comic relief, but also holds philosophical relevance in the context of Seong-hyeo's philosophy about emotional attachments. It's a nice expansion to San's character that explains, among other things, why she has been so demure about romance.

Unfortunately this characterization completely flies in the face of San's obsession with revenge, which has only ever seemed to make life for San and her family more difficult. So far San still hasn't even managed to figure out who, specifically, she needs to take revenge against. Most of San's efforts to try and figure that much out have nearly resulted in her arrest, and only the timely arrival of someone from the royal family has prevented this from happening.

It's also unclear to me why it's necessary for San to skulk about in the shadows to try and accomplish revenge anyway, considering she's the only daughter of a rich, powerful family. My guess is it's a matter of genre conventions. San has to have a high social rank in order to be a plausible marriage partner for one of the princes. But they have to fall in love in a salt of the earth type situation to contrast with Prince Won's parents, who were brought together in an arranged marriage and hate each other for that.

Considering how central parental issues are to character motivation in "The King Loves", it's unfortunate that Prince Won's mom and dad are the only ones with any kind of screen presence. Prince Lin's father and San's father are so thinly drawn they just come off as pushovers at best and toadies at worst. Meanwhile, the death of San's mother hasn't even left so much as an obvious hole in San's life, so it's really difficult to get engaged with how San is obsessed with finding her.