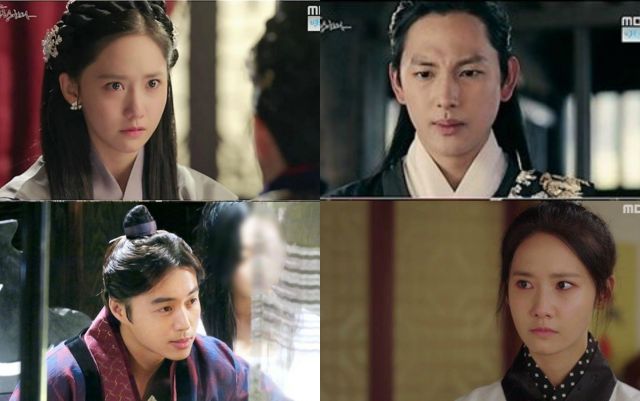 Every time someone gets close to actually accomplishing something in "The King Loves", we can usually count on another character to swoop in and prevent anything from happening. Up until now this hasn't annoyed me so much, since the event that is prevented from happening is usually the murder of one or more important characters. But taking this episode in full summary, aside from murder, no one can come up with any particularly proactive goals.

A lack of agency on the part of the main characters is the chief problem with this. Time and again we have to watch Prince Won, Prince Lin, and San run off to some important person, usually their parents, to get permission to do anything. And usually, whether this permission is granted or refused depends on some completely arbitrary whims on the part of the older characters. The feelings of the main characters are only ever relevant to the extent they can further some plan of the parents.

For the most part these schemes are fairly boring. But I continue to really like Chzhuan Muvan Khou, whose motivation has shifted to trying to do right by her son. Bad attitude notwithstanding Chzhuan Muvan Khou is capable of at least trying to do the right thing. Unfortunately a lot of her plans are hamstrung by the specific way the main characters themselves sabotage them, by refusing to make compromises. This leads to them inevitably wrecking things.

These contradictions are the main reason why so much of "The King Loves" does not work. Rather than coming off as romantic and well-meaning, the main characters instead come off as unreasonably stubborn yet generally powerless. The lack of a real supporting cast has a lot to do with this. Even when they're technically useless, the mere existence of loyal retainers is usually enough to emphasize that such and such main character is the leader of a broad coalition, with many available solutions.

But the members of Prince Won's personal guard barely even have personalities, let alone demonstrated competence or independent motivation. Given the way "The King Loves" structures its drama completely around the love triangle, this isn't so surprising. We can't expect these guys to get all excited about San, a woman I'm not even sure they've ever met. The problem being that, for many of those same reasons, I can't really get all that excited about where San's going either.