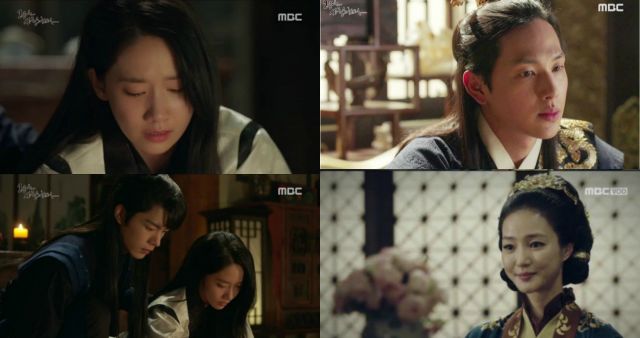 San has a meeting with Chzhuan Muvan Khou here that has a rather curious emphasis. At one point some sort of small...thing is deliberately placed within San's eyesight. She notices the object, then continues the discussion. We later find out that the object in question was medicine, and apparently was instantly identified as such by San at the time although to our modern eyes the object didn't look like much of anything. It is only after a brief rampage that San suddenly asks herself- why is there random important medicine in Chzhuan Muvan Khou's chambers?

The scene is very striking because it all too perfectly encapsulates the single most flaring flaw in "The King Loves"- how emphasis is decided at random, without context. I frequently have trouble remembering which scenes were actually supposed to be important or why because the exposition is so paltry. It especially doesn't help that the big showstopper scenes always center around background characters who barely have any personality.

Like Yeong-baek, who becomes very deathly ill. It was bad enough that San had one tragically dead parent about whom we knew nothing. Now she has two. But the real frustrating bit is that the characters discuss every minute aspect of Yeong-baek's death except for the obvious one. San is now the sole inheritor to the Eun family fortune, and unmarried. Even bearing in mind that the background setting is Buddhist Goryeo, not Confucian Silla, this seems really important, especially in light of how San has only ever been important to the story owing to her family inheritance.

Yet rather than address this "The King Loves" instead takes us on another random detour to see the mentally ill state of some...guy that Prince Lin knows. This character's insanity is apparently some sort of punishment for his actions during one of the drama's more distinctive flashbacks. Except that, even seeing the flashback again, the guy doesn't seem to actually be doing anything to warrant Chzhuan Muvan Khou's ire.

More than the logical gap, though, it's the characterization gap that really hurts "The King Loves", because it keeps expecting us to have emotional reactions to characters who I'm not even sure have names, let alone obvious relevance to the main story. There's really just no getting around it at this point. "The King Loves" is a complete mess, that can't even manage to be bad television in a way that's interesting to explain.