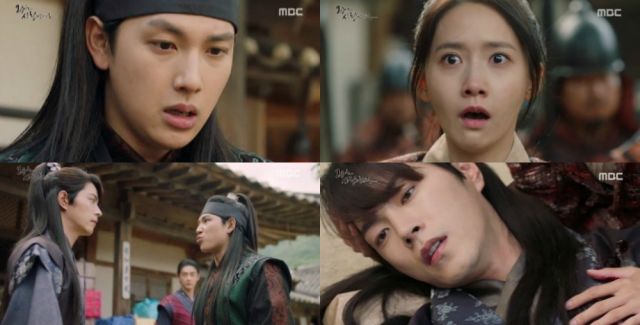 With his mother's death, Prince Won is sick and tired of everything. No more mister nice guy. Something even more messed up than usual has been going on with Prince Won's parents, and Prince Won is prepared to murder anyone stupid enough to stand in the way between him and answers. While Prince Won's change in attitude is clearly intended to be frightening, I kind of felt like fist-pumping. Finally, a character who takes the royal conspiracy seriously.

Meanwhile, Prince Lin continues to make very stupid decisions that make him look like one of Song-in's conspirators. I cannot for the life of me figure out why he thought helping King Chungnyeol escape the throne room was a good idea. Yes, Prince Won was angry and King Chungnyeol is the main immediately obvious suspect in Chzhuan Muvan Khou's death. All the same, Prince Won has not seen his father in a very long time, and does not know the extent of King Chungnyeol's illness.

It would have been immediately obvious to Prince Won that King Chungnyeol was physically incapable of giving the order to kill Chzhuan Muvan Khou's personal guards. By acting the way he did, Prince Lin has created the impression that there is something worth hiding. In reality, the only person with anyone to hide is Song-in, because Chzhuan Muvan Khou's unexpected arrival has scuttled all his plans and already resulted in the destruction of his power base.

In the early episodes, Prince Won's impulsiveness seemed like a glaring flaw, and Prince Lin's coolheadedness a shining virtue. Now those ideals have been completely flipped on their head. This is why Song-in has not tried to involve Prince Won in the conspiracy. He's too much of a wild card. Whereas Prince Lin and San, precisely by being too deliberating, are easily manipulated into being his pawns while convincing themselves that in the long run they're really helping Prince Won.

Such a story arc has great dramatic potential. Unfortunately, the presentation is giving the very strong impression that Prince Lin is the one we're supposed to be sympathizing with, not Prince Won. And knowing that the final episodes are likely going to result either in Prince Won's defeat or in apologizing to Prince Lin and San...well, that just agitating. Because what in the world does Prince Won even have to apologize for when Prince Lin and San are the ones who refuse to just trust him, after all they've been through?