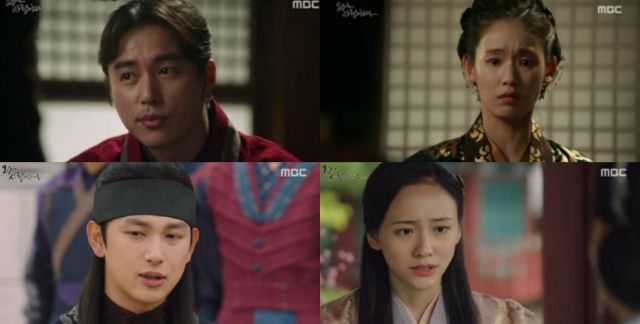 Prince Lin's noble, if obviously stupid gesture at the last cliffhanger ultimately succeeds in getting Prince Won to calm down, so their plot arc ends in a fairly boring reconciliation. Once again I am annoyed at just how sheerly unnecessarily this entire dispute was. Prince Lin himself apparently had enough sense to explain to Prince Won what he was doing and why - in letter form. And so once again "The King Loves" has an excuse to tell us the story through flashbacks instead of as it happens.

That's always been one of the most baffling aspects of this drama- the way it insists on telling the story in non-chronological order. If we had known the exact extent of Prince Lin's collaboration with Song-in, there might have been actual dramatic ambiguity about whether he was actually going to betray Prince Won. Instead, we had the bizarre contrast of Prince Lin talking about how much he loves Prince Won while his actions appear to be specifically designed to make the young regent angry.

Whatever happened to straightforward storytelling? The moment at the beginning of episode thirty eight where King Chungnyeol wakes up and is informed of what's going on is by far the strongest of the set, because we know exactly what's happening. King Chungnyeol is in shock at having realized what's happened while he was out sick, and has a brutal emotional reaction. Like Jang Young-nam before him, Jung Bo-suk gives a powerful performance that likely predates a massive alteration in his character's comprehension of the world around him.

By the way, it turns out that Song-in was just crazy this entire time and never had a coherent motivation. It's simply more obvious now that Moo-bi is dead, although honestly, I kind of suspect that Oh Min-suk himself never really understood what was going on with Song-in, because the character has always been portrayed as an intelligent calculating villain. This was a reasonable interpretation until we got to the end game, anyway, where Song-in has a whole lot of nothing.

Well no, actually, Song-in does manage to come up with a really stupid plan to ensnare San. That entire plot twist puts an unintentionally hilarious spin on Prince Won and Prince Lin talking about the importance of trust and friendship. That San did not simply ask them for help, or at least for their opinion on what to do, is as clear an indication as possible that she hasn't learned anything over the course of the entire story.