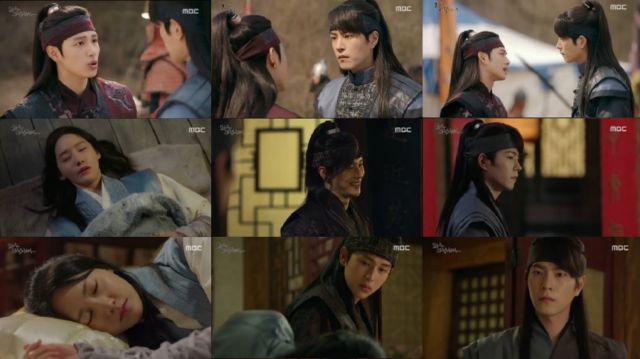 Now that the lead characters have stumbled upon a genuine mystery, all of a sudden the confusion over what role the other characters are supposed to be playing in the story has gotten a lot more palatable. If Prince Won, Prince Lin, and Eun-san don't know what's going on in the conspiracy, why should we? We do know that Song-in is the one instigating this complex series of events. Oddly enough the main characters struggle to make this connection, on account of their being easily distracted.

Well, mostly it's Prince Won who gets easily distracted. In general he kind of comes off like an idiot. Prince Won's bravado would not have been of much help if King Chungnyeol's life has actually been in danger. Also his flirting obsession with Eun-san completely detracts from the investigation. I'm really appreciating the disgusted looks we get from Hong Jong-hyun as Prince Won's smarter, handsomer brother. They're the perfect mix of love and annoyance.

This emoting also seems specifically designed to make us like Prince Lin more than Prince Won, since Prince Lin has a much better grasp on how dangerous the overall situation is. Eun-san is kind of midway between the brothers. On one end, Eun-san was embroiled in her own investigation long before Prince Lin figured out what was going on. On the other end, Eun-san keeps encouraging Prince Won's flirting when she should really know better, considering how the woman is constantly only barely making escapes with the help of friends who happen to be nearby.

The attempted genre mash of romantic comedy with royal conspiracy is what puts "The King Loves" in an awkward place. Mind, "My Sassy Girl - Drama" just successfully managed to fuse those two disparate genres, and that was mainly because of better tone management. "My Sassy Girl - Drama" was a string of royal conspiracy plots that were broken up with romantic comedy segments, or infused with them when appropriate.

"The King Loves", by contrast, is just one very long conspiracy where the romance is happening in the foreground. I do appreciate that, by having finally given its lead characters a singular goal, "The King Loves" has just become a lot easier to follow. I can mostly grasp who all the characters are and why they're important, especially now that there are flashbacks to give context to previously inexplicable scenes. Now I can only hope this mystery has a decent payoff.