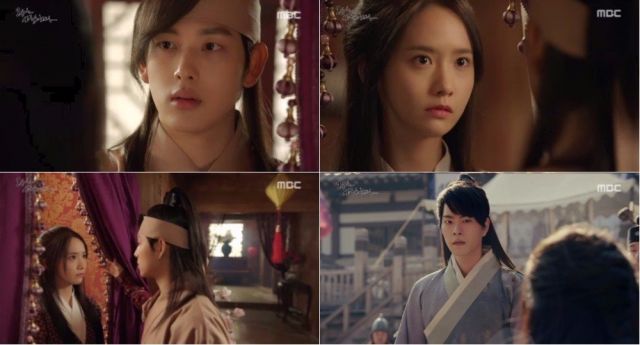 The tonal dissonance between the goofy romantic main plot and the conspiratorial main plot is narrowed somewhat here, but only because Eun-san manages to get stuck in a bad situation that requires princely intervention in order to pull off an escape. This forces Prince Won to take on a fairly serious demeanor for some time. But focused as he is on negotiation rather than action,  Prince Won is predictably outshined by his more proactive brother.

The increasingly byzantine conspiracies of "The King Loves" have this unfortunate effect of making the main characters look like patsies. Note how the main reason Eun-san gets in trouble this time, having always made a clean getaway in the past, is because she is unable to locate one of the Princes or their friends before getting take in by other less sympathetic authority figures. Eun-san's reflexive habit of running away is especially unfortunate, since it makes her look unavoidably guilty.

But the more obvious issue with the byzantine conspiracy is that, since we have no clue how deep it goes or what its purpose even is, nearly every character is robbed of agency. Do they have their own motives, or is Song-in simply manipulating them all like puppets on strings? This would not be a difficult task, since what little motivation we get is so one-dimensional as to be easily suited to that purpose.

The only character aside from Song-in with a potentially complex agenda is Chzhuan Muvan Khou- and even there, by complexity, I mean she puts clear forethought into her actions and plans ahead of time. Chzhuan Muvan Khou is also a dangerous character in that even though she has her own loyal personal guard, neither prince is willing to make a major stand against her owing to maternal issues. What's more, in limited context Chzhuan Muvan Khou's actions can be read sympathetically. The full context of her collusion with Song-in likely tells a different story.

I don't know that there's any real hope of this payoff being all that convincing. The characters who make for the most compelling drama protagonists are the ones who are competent and goal-driven. All three of the leads are on really shaky ground when it comes to that, and it beggars disbelief that any of them could pose a serious threat to a conspiracy whose existence they continue to investigate very slowly, mainly because the direction keeps implying that this clue hunting is mostly just a pretext for Prince Won to take Eun-san out on dates.