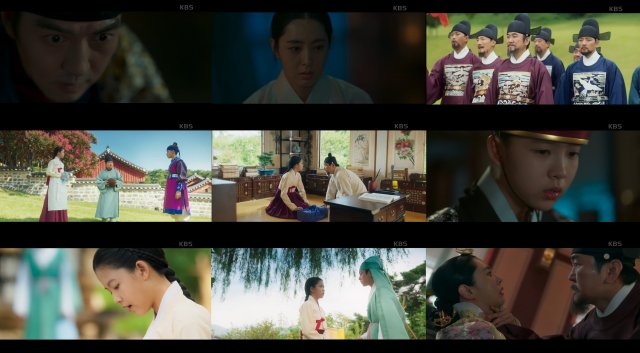 In the historical drama "Queen Seon-deok" an important part of the premise is that twins in traditional Korean culture are considered a bad omen. A weak Silla monarchy thus hides the existence of twins to forestall a possible coup. I bring this up because "The King's Affection" has an identical plot point, except poorly explained and rationalized. So when Grandpa Han (played by Yoon Je-moon) responds to the news of twins by murdering staff at the Joseon gyencology bureau, this seems like an overreaction. He's also rather easily talked into just leaving.

"The King's Affection" gets no points for originality. To date the drama's just a random grab bag of plot hooks from other dramas. The only thing approaching innovation here is adorable crossdressing children. And while I liked that part, that's just backstory for the premise and is finished at the end of this episode. Incidentally, the ending proves to be an unintentional farce with a disaster prompted entirely by miscommunication.

Grandpa Han's weird obsession with this twin taboo is causing far more problems than it's solving. So I'm skeptical of the drama's villain as some sort of brilliant mastermind. It especially doesn't help that royal intrigue politics are completely out of focus for the entire episode. It's not at all clear what Grandpa Han even wants aside from just generically being in charge of an ambiguous era of Joseon.

At least I think is Joseon? That's what era the costumes are from, and there's no possible way they had soccer balls in the Goryeo era. I bring up the Goryeo era because King Hyejong (played by Lee Pil-mo) was an actual king during the Goryeo era, but the name appears to be coincidental. Here King, well, technically still Grand Prince Hyejong is a man of contrasts. On one end, he makes no attempt to save his infant daughter's life. On the other, he's clearly a cool dad who has a way with words.

Nothing about the first episode of "The King's Affection" is really all that bad, it just feels kind of pointless. All the usual cliches are here, from protagonists getting submerged underwater to a first date montage to a dancing executioner, with perfunctory and even nonexistent character introductions making it difficult to tell who is doing what and why. "The King's Affection" is at least nice to look at, although the costumes aren't so great as to justify writing this lazy.