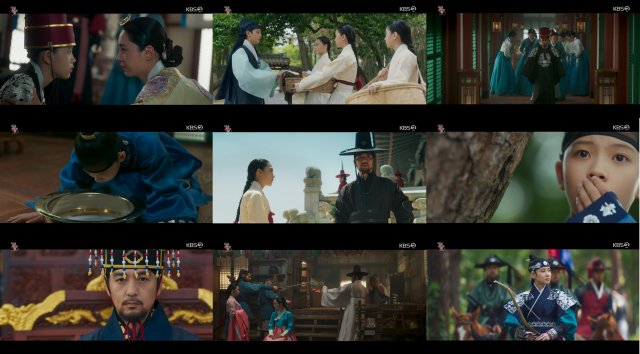 So in "The King's Affection" murder appears to be legal. Inspector Jeong (played by Bae Soo-bin) just runs around killing people in broad daylight and no one even bothers to ask why. At first I thought, OK, maybe Inspector Jeong just has a license to kill. But nope, post-timeskip a lady of means threatens to murder a doctor for not getting medicine fast enough. Then a member of the royal court tries to kill a now adult Crown Prince Lee (played by a gorgeous Park Eun-bin).

But I'm getting ahead of myself. Most of this episode is still in backstory, as Crown Prince Lee is forced to adapt to the fact that she must now permanently play the role of her twin brother. To be fair, "The King's Affection" can be a lot of fun when it's not taking itself so seriously. I liked Crown Prince Lee's awkward attempts to force herself into acting like a haughty prince. Present day Crown Prince Lee really does look like someone who's spent the last ten years practicing being a jerk.

The serious drama is not so well done, mostly because of the inconsistent way the exposition is paced. It took me way too long to realize that Inspector Jeong is the father of Doctor Jeong (played by "Rowoon"), because the bonding scenes with just the two of them in the backstory make Inspector Jeong look fairly smart. In actuality the inspector just stabs people first and asks questions never.

I also didn't realize that Doctor Jeong was Crown Prince Hwi's childhood crush because he never said anything about studying medicine, just that he was studying in general to work with the prince. While I guess a doctor can work with the prince, the script made it sound like he wanted to be an advisor. Also, Crown Prince Lee's mom Crown Princess Kim (played by Han Chae-ah) has apparently been sick this entire time?

But the most egregious omission was that, apparently, the royal family is out to get each other so being Crown Prince is actually dangerous? "The King's Affection" really should have just established that in the first episode, instead of making it seem like Grandpa Han wanted to kill his granddaughter because he's misogynistic. Even the first glimpse, or even reference, to the royal cousins is a friendly one. It's not until near the end of the episode we finally see a family member act in a threatening manner.