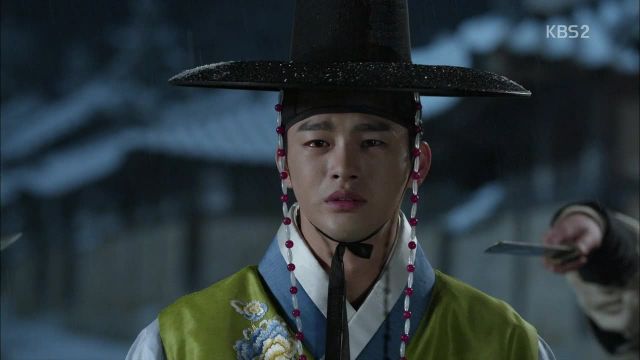 Gwanghae is learning and growing by leaps and bounds as "The King's Face" just about hits its halfway mark. He has developed a concrete goal and political aspirations that pits him against many people, including his family. But the lessons he has learned thus far are making him more wary than the impetuous child of yore.

"The King's Face" has a central focus of face reading and the idea that one cannot escape one's destiny. It is Gwanghae's destiny to be a good king. It is Ga-hee's destiny to be with King Seonjo. What this drama does right is the journey to those destinies. It isn't just a quick decision and then its over. Gwanghae has to tread the long, hard road to become the wise king history knew him as. Ga-hee has to fight her love for Gwanghae and her political aspirations as part of a secret, rebel society on her way to becoming the king's woman. King Seonjo fights his destiny as an unworthy king and in doing that, teacher Gwanghae what he wants to achieve when he becomes king. It's a nice little circle that is made. What this show lacks, however, is real impact; real conviction.

This show feels like its going through the motions. It's hitting the correct historical mile markers, making the right time accurate conflicts happen, but it lacks oomph. The prime example is the love story between Ga-hee and Gwanghae that was badly prepared, barely flown, and then quickly grounded for a whole lot of moping. Even now, with some time behind them the lovers are more convincing, but it is too late. Gwanghae is married off and the politics are what drives "The King's Face". The other event that isn't as powerful as it should be is the threat of the Japanese invasion. It is almost an after thought than an actual concern and the show doesn't frame it strongly enough to be a true point of interest.

What is right, however, is that Gwanghae knows now that he wants to be king to be able to enact change. It pits him against Imhae, his beloved older brother, who is none too happy to have another opponent to the throne. It even pits him against his father who has always felt threatened by Gwanghae's mental acuity. Now if the show would make Gwanghae cry less and do more, he would be a truly effective character.

As for Do-chi and Ga-hee. They feel like afterthoughts in the show. Do-chi is more impactful now that he has declared a personal war against Gwanghae for breaking Ga-hee's heart. Having Do-chi be only politically motivated made him boring. Just like having Ga-hee mope over Gwanghae makes her boring. She was much more interesting when she was battling her love and hate for him.

I suppose what "The King's Face" needs is to firm up its tone. It needs some drama exercise to make it less wishy washy. It lacks conviction. Whenever a character or plotline firms up is the time when I feel most interesting. When people are wavering, crying, and brooding, it deflates like a popped balloon. Stay strong, show!