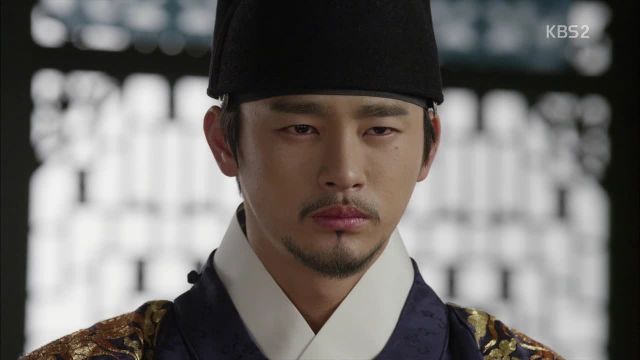 In it's last episodes "The King's Face" has curled into a complex, layered show that finally holds genuine tensions that do not feel contrived. Sixteen years have passed since Gwanghae became the Crown Prince and the warring factions in the government have a lot of fodder for battle.

A strong point of the episode was the fact that it brought Ga-hee's actions full circle. In the first episode she says that traitors should be punished, and the dialogue plus the images on screen referenced that the traitor was Gwanghae, the man she supposedly loved. The same scene appears in this episode and the reference was indeed correct, Gwanghae is the traitor to which she refers, however, we now know she does it for his own sake. Politics and love have become so twisted over time that the only way she can protect Gwanghae is to completely denounce him. Her story is a sad one, but it is also satisfying. Despite all she remained loyal, and loyalty is a winner in storylines, especially ones that include star-crossed lovers like Ga-hee and Gwanghae.

Speaking of Gwanghae, he is much more confident now and the passage of time has been well-shown in his character. The time skips still make little sense in how they are placed and utilized, especially in the ensuing scenes that should explain what has passed during the skipped time. Regardless, Gwanghae has gained many followers and many enemies. One of the biggest followers is Heo Gyeon who made his entrance as comic relief and who is now showing is true worth: an ideological radical who is believed to have penned the legendary story of Hong Gil Dong, the Korean Robin Hood. Before the last two episodes he didn't live up to his historical name, but he certainly does now. His extreme views sink Gwanghae into trouble as well as those who support Gwanghae as a future king. This is the kind of plot stuffs that should've been brought in sooner. The episode was the most exciting yet with all of the intrigue flying about.

Part of the intrigue is due to the dogged perseverance of the escaped Do-chi. He is loyal to no one but himself, and uses power-hungry royals to further his cause. The young queen Inmok and the disregarded oldest prince Imhae are the two that he has in the palm of his hand. Although his plans and ability to network are remarkable and provide wonderful plot material, Do-chi's character still lacks. The inner motivations that drive him are still not made clear and they would allow the viewer to connect better with him.

After all of this time, the king has become no less self-centered. He has, however, become even more paranoid and willing to strike out at anything that threatens his throne. King Seonjo's deteriorating health has put him on guard against rumors and Do-chi uses that tension to his advantage. In fact, the king has become more irrational with age and he makes unilateral decisions that are influenced by the gossip he hears. While his retainers become more crafty with age, the king does just the opposite. It makes him a terrifying and unpredictable opponent.

The question that remains is: What is the endgame for "The King's Face"? Does the show just hope to crown Gwanghae and let that be that? Does it want to show all the wonderful and terrible things that happened under his rule? We'll find out next episode.