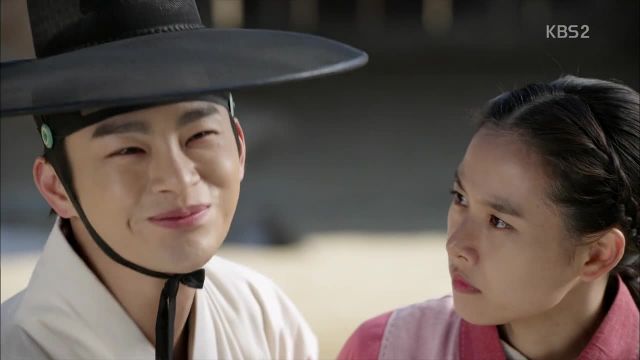 This episode was all about the lovers coming back together and the circumstances that conspire to keep them apart. Although the circumstances are political, it is the love story that fuels the episode while politics takes a decided back seat.

What has bothered me about Gwanghae made itself clear in this episode. He was a driven man, known to history for his great ruling ability. Yet, in "The King's Face" his main drive is romantic and he has no political aspirations. Or, if he does, they haven't yet been made known. While Ga-hee is full of purpose, Gwanghae seemingly has none. It makes him rather one-dimensional. It also gives the premise of the drama little to go on. It's about Gwanghae using face reading to battle his father and ascend to the throne. The show needs to get beyond the romance in Gwanghae's life and have him better react to the political ramifications of his actions.

Not only that, but Ga-hee is so fraught with tension that her character is magnetic, which makes Gwanghae pale by comparison. She is burdened by loving who she believes to be her enemy. It would be better if Gwanghae felt the deaths of her parents more heavily or showed the burden of thinking she was dead. It also doesn't help that Gwanghae is given humorous lines in very inappropriate times.

Gwanghae is learning the underground of politics as he ventures through his romance, which is good, but he is learning only because it has to do with Ga-hee, not because of a vision to rule and improve Joseon. There is no tension flowing from him towards his brothers. They battle him and each other for the crown, but he avoids it all. The battle for the crown was a huge historical point of contention and the plot fodder for many a book, movie, and drama. In this story it is lackluster. Lady Kim, Prince Shinseong's mother, is a comical villain who makes all the preposterous villainous faces required, but makes very little imprint on any political proceedings.

Do-chi could be more interesting. He is not a natural leader the way his teacher was. He is too impulsive and it's rather brilliant to put a motivated, but not-quite-suited man in a place of leadership. That could have so much impact on the story that hasn't yet happened. There was also a very short scene that pits Do-chi against the current face reader. It seemed to preface an important rivalry, but was unceremoniously placed and prepared. If this is to be a meaty battle, it should've had more setup, or at least a strong setup.

"The King's Face" is a drama made to watch, not meant for deeper analysis, not yet. Nothing much can be gleaned from it, but it sure is entertaining.