[HanCinema's Drama Review] "The Man In My House" Episode 15 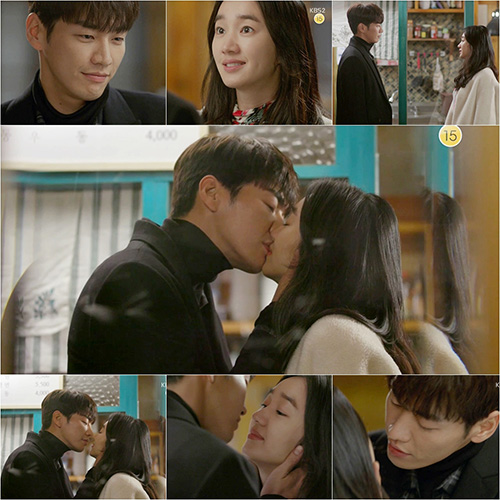 Seong-gyoo (played by Noh Young-gook) is Na-ri's long time absentee father who has for some nefarious reason chosen to try and re-enter Na-ri's life. Na-ri, as is typical, responds to Seong-gyoo's intrusion with sensible mistrust. Na-ri will hear Seong-gyoo out and even help him as necessary but in the end, she's not changing any serious decisions just because of Seong-gyoo's weak politicking. That's part of the trouble with having such a sensible heroine- Na-ri evades danger before it even happens, making for a less than exciting drama.

Indeed, Seong-gyoo's general ineffectiveness as a villain served to remind me that most of the characters in "The Man In My House", be they actual villains or mere supporting cast, are chiefly distinguished by their general inability to influence anyone. Yeo-joo hovers around central characters in the hopes of justifying her presence somehow. Deok-bong, too, has long decided that the main story is pretty stupid and is having no part of it.

So what actually happens this episode? Not much really. The various characters hang out and have fun, ignoring the real estate plot while making long-term living situations the central serious plot point. Na-ri and Nan-gil's light-hearted romantic comedy chemistry makes a comeback, and it's cute watching them pretend not to like each other. That's always fun mainly because Soo Ae and Kim Young-kwang are both very good at sarcasm.

Overall, though, the ending is such a foregone conclusion that there's no apparent dramatic tension. Deok-bong's family lacks leverage by which to brute force the real estate deal, especially when Deok-bong himself isn't cooperating. Then again, even when Deok-bong was cooperating all that ever happened in that plot was people would ask Na-ri and Nan-gil to give them them the land. Then the leads would say no. The villains might get a bit huffy but ultimately could never get around that rather mundane obstacle.

The plot in "The Man In My House" is completely contrived, although I will admit writer Kim Eun-jeong did a better job than most of hiding it. The backstory exists for the sole purpose of explaining why Nan-gil is Na-ri's stepfather. Unfortunately that is overall just not a particularly interesting end in and of itself and the romantic chemistry, while good, has been stifled enough as of late to not really make up for that. All that's left to wait for now is the final payoff, which I'm expecting to be satisfactory at best.

"[HanCinema's Drama Review] "The Man In My House" Episode 15"
by HanCinema is licensed under a Creative Commons Attribution-Share Alike 3.0 Unported License.