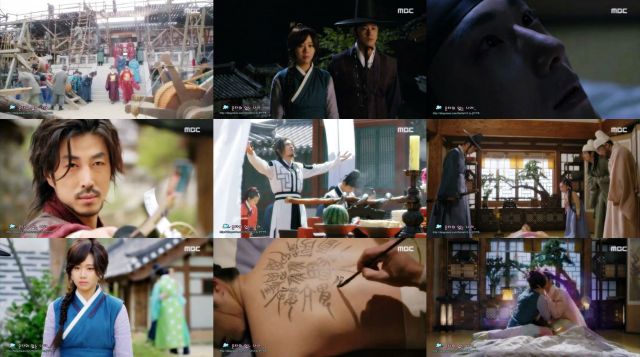 There's an actual story here, surprisingly enough. As usual it's pretty easy to point out the general inconsistencies. One would think that given the main characters have a ghost detecting machine, a guy whose entire job is a lifetime of experience of dealing with ghosts, and three actual ghosts with nothing better to do than stand guard at all hours, it would be pretty difficult to demonically possess one of the main characters. Still, one of these prevention devices does eventually work, even if it takes the whole episode.

The trajectory of the story here is actually a pretty passable one. There's a conflict, a resolution, and some pretty nifty sword fights over the course of all this. Even the backstabbing in the palace takes on a slight din of relevance, for the simple reason that everybody's starting to get impatient. It seems like the evil plans should have come to fruition by now- and amazingly, they finally do. Although I'm not at all sure what was actually going on while Do-ha was witnessing the rapture.

Character arcs in general don't do too well here mostly because they weren't that well developed in the first place. The cliffhanger is a kiss scene. That probably sounds inexplicable, given that all of the action up until that point has been about fighting ghosts literally and metaphorically, but there it is. The kiss is particularly puzzling given that right before it happens there's this pretty excessive flashbacking to events in the second episode that also led to a kiss. That kiss was not a good thing. Although to be quite honest I'm not sure what the point of that kiss was either.

Still, limited credit must be granted to "The Night Watchman's Journal" for at least managing to accomplish its basic goals- a fantasy adventure in traditional Korea that involves ghosts. If the entire drama was like this episode the experience would definitely be a lot more tolerable. It's another case of the drama not really being good so much as my standards have been set really low at this point.

Regardless, as long as the drama continues to go for distraction and dynamic movement, I'm willing to forgive the occasional inconsistency. At this point the motivation of every character can be clearly and succinctly gauged up, and even if we can't predict what they'll do nextwell, that's a good thing, really. Having a character broadly written enough that any numbers of reactions would be plausible. Just as long as it doesn't involve heretofore undefined ghost powers.