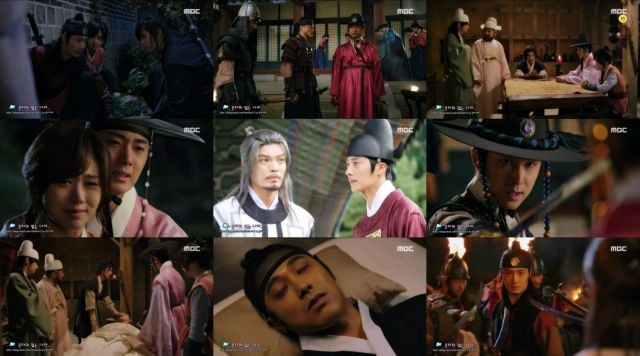 The main characters are still having a lot of trouble with the whole work as a team thing. It should be really obvious by now that they accomplish a lot more through mutual cooperation than they do by just going it alone. For what it's worth, at least this time the success the villains have in cornering the main characters makes a bit more sense. These are actively, deliberately designed traps that the heroes can't reasonably be expected to predict. They could do a better job reactively, but at least the failures make sense.

One of the few highlights in this drama are the action scenes, mostly by virtue of the fact that they involve a decent understanding of battle logistics. I like Do-ha's whip. As presented it's not actually a violently weapon. Rather, she just uses it either to disarm or immobilize enemies, which is actually really important when ghost possessions are the main problem the characters are dealing with on a frequent basis.

But again, given this much, it's frankly a little embarassing that they're all so bad at it. Sang-hyeon unveiles another new ghost hunting tool this episode, and really, there's absolutely no reason for him to be withholding all these techniques. There are several times I can think of in this drama that the heroes could have made good use of these needles if only for slowing people down- if nothing else they make for a handy way of testing whether or not someone has been possessed by a ghost at all.

This is probably the biggest nagging frustration in regards to the way "The Night Watchman's Journal" presents its supernatural rules- they can change at pretty much a moment's notice for no apparent reason. What we see of Sadam's powers here isn't actually that much of a problem. To date, it seems perfectly reasonable that with all the other general illusions he can cook up that the man could somehow design the system that leads to the cliffhanger.

Plenty of other questions still abound, though, like the awkward position the drama is in regarding to what extent people believe in ghosts. There's times I wonder whether the heroes would actually be better suited to trying to pull off an investigation with supporting evidence than just trying to solve the problem all in one fell swoop. Mainly this is because for whatever reason no character in this drama has a personal armed guard. Really, though, it's a little late to be going on about that. I'll be satisfied with this drama if it can at least maintain the current blend of action and clearly-defined plot until the end.