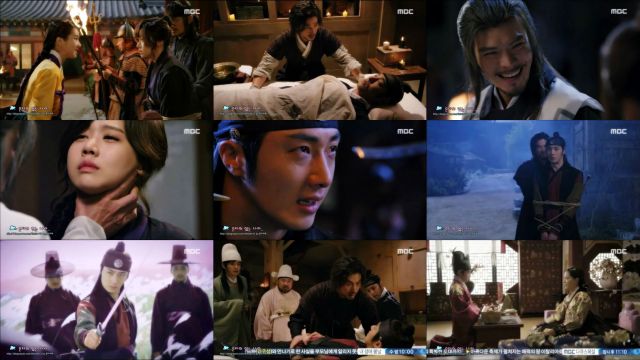 Sadam gains yet another power this episode- the ability to teleport faraway people to other faraway places. I'm assuming that the faraway part is an important part of the skill, since there have been plenty of times up until now where he could have used this power to get nearby people away from him. But really, the man's long term plans are so inscrutable it's impossible to tell whether his long range thinking has any kind of basis in logic.

As for the heroes, well, it's been another mostly unsuccessful day. After getting themselves caught last time only one of them is able to make an escape, and then it's right back to the spirit realm to try to get Lee-rin out so that everyone can finally confront Sadam once and for all. It's not clear what context the final confrontation's going to take, but if this really does just end in another fight with the dragon I'm going to be terribly annoyed.

I think part of what's made "The Night Watchman's Journal" so awkward is that it's trying be a drama about cool fight scenes with sword and sorcery, but the villains aren't oriented around that kind of storytelling at all. Pretty much every setback the heroes have ever faced has been a result of political maneuvering, not an inability to take Sadam on in a fight. Soo-ryeon is the most obvious example of this, as she and her father have no business in the drama at all except to throw up bureaucratic roadblocks.

Now, to be clear, this can oftentimes be reasonably engaging. This sets up interesting obstacles that the heroes need to think their way out of rather than just charging through. The problem is they never actually do much thinking. They're always bringing a sword to a penfight. Although even this is better than the way other characters keep confronting Sadam only without even so much as a guard. Why are there always armies of guards hanging around everywhere except inside the palace anyway?

Well, obviously to provoke swordfights. For all the larger plot problems "The Night Watchman's Journal" continues to work passably as a fantasy action series. The storyline movements here are all mostly comprehensible, although as usual, they'd work a lot better if the drama had actually explained its ghost rules in useful detail at some point. Still, this episode's a decent enough bit of escapism.