[HanCinema's Drama Review] "The Prime Minister and I" Episode 8 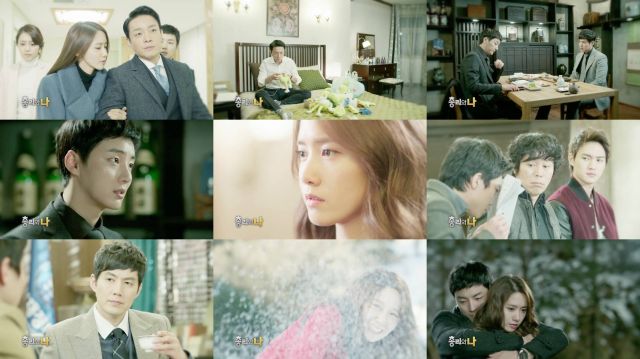 I have to admit, the romance in this drama can get pretty adorable. The cliffhanger last time honestly strained believability a bit- Yool was there in time to save her, but nobody in his security crew was? Still, it's hard to get annoyed about a story development that forces Da-jeong to play the doting wife, and also ends up with such an adorably cute little drawing on the cast.

At its best "The Prime Minister and I" has lots of neat little magical qualities that are somewhat silly but also endearing. Note the scene where Man-se greets his older brother. He's using a tiny adorable Man-se sized door. That's a ridiculous little thing to toss in there and it's easy to miss. There's details like that all over the drama though, such that even a casual or cynical viewer will find something to smile at.

Real serious progress is also being made in terms of making Yool become a better parent. He actually starts trying to talk to his kids and see what they're doing. Yool still fails, as usual, but the cause this time is something he failed to anticipate. Really, the important bit is just that he's trying. And also that he drifts off into the land of imagination for a moment before finally getting snapped back to Earth.

These subtle changes aren't just for the benefit of the viewer. The other characters in the drama clearly notice them. I like the way that Na-ra (played by Jeon Min-seo) is presented here. She doesn't have much in the way of a plot hook, like her brothers do, but she's a smart girl and can tell that something has changed with her father on an emotional level. I like the little scheming smile her actress always gives. It's almost as a good as a genuinely happy one.

While for the most part this episode focuses on these little romantic domestic pleasantries there is still a plot going on- however, because "The Prime Minister and I" is focusing so well on its strengths, the political scheming is actually a fairly welcome interlude. Every character is well-defined in terms of general motivation, so the immediate conflict is extremely easy to parse. The looming dramatic question is- can the budding relationship between Yool and Da-jeong survive the spectre of scandal? I mean, I know the answer is almost certainly yes, finding how, though, that's the fun part.

"The Prime Minister and I" is directed by Lee So-yeon-I and written by Kim Eun-hee and Yoon Eun-kyeong and features Lee Beom-soo, Yoona, Yoon Si-yoon and Chae Jung-an.

"[HanCinema's Drama Review] "The Prime Minister and I" Episode 8"
by HanCinema is licensed under a Creative Commons Attribution-Share Alike 3.0 Unported License.