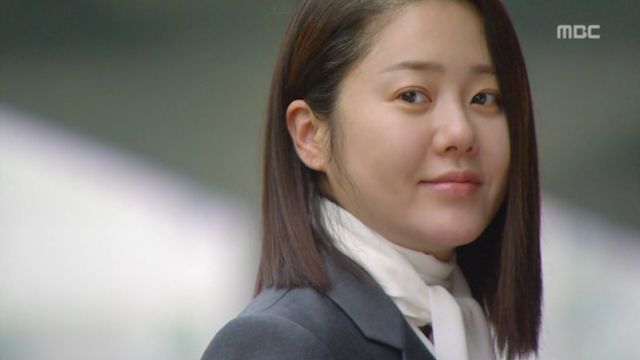 Here we have it folks, the end of "The Queen's Classroom". It was quite a mixed watch for me. Let's deal first with the final episode itself, then we'll delve into the drama as a whole.

The last episode focused on tying up loose ends with all of the characters plot threads. And by all, I mean every single character with more than four lines. It was so much information about all of the students and teachers and parents that the episode was bogged down by details. The students explained how Ma's teaching and caring influenced them to change their lives. While the message is good, an voiced-over narrative over a visual montage would've been much more effective and much less draggy. But that's what happens when there just isn't enough plot material to span sixteen episodes. 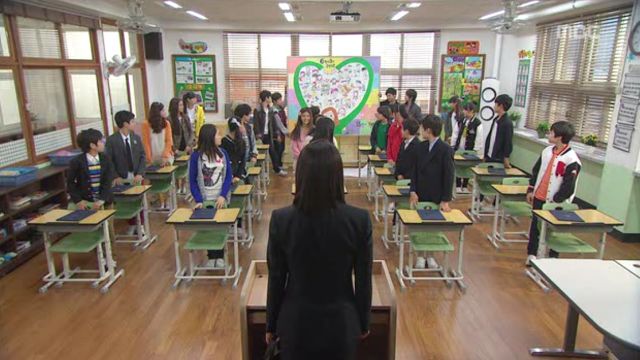 Ma standing before her class

Basically, the outcome of Ma's teaching experience was that she affected the children for the better. They left her classroom well-equipped for the future with loyal friends and the mettle to work hard for their dreams. Ma even influenced her fellow teachers with the intensity of her devotion to her students. It was the reason that the principal hired her in the first place in spite of her sullied past.

I find this is a very Japanese drama and anime concept: being accepted because of how much one cares. Or the power of love for someone can overcome anything. It's romantic, but so unrealistic and that's what makes this drama's ending hard to swallow. Ma is ultimately fired, but the kids, their families, her co-workers, they are all positively affected by her work. The kids move onto middle school, missing their insane sixth grade teacher and Ma promises a return to the public school system. She is satisfied by how the children turned out. In the drama, the children are happy and fulfilled and seem to be completely unaffected by the mental torture she inflicted upon them. That is just plain unrealistic. Trauma is not healed just because the end of the traumatic experience is a happy one. 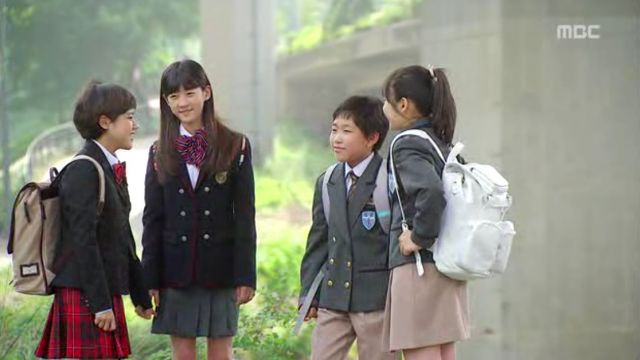 Ha-na, So-hyun, Dong-goo, and Bo-mi on their first day of middle school

However, if I were to extricate myself from my complete annoyance with Ma's teaching methods, I would say that the message of the drama is beautiful. Work hard in school to learn, not for grades. Stick with your friends because living happily day by day is important. Parents should be happy themselves and not just focus solely on their children. These are all wonderful messages. The vehicle of delivery is the problem. These messages can be taught without pushing children and their parents to the edge of sanity and back.

Also, I went into this drama hoping that the children in her class would change her for the better as she helped them to grow. Instead, the kiddies just fulfilled her expectations: children are full of potential and can actualize hopes and dreams for the future. Ma Yeo-jin smiles at the very end, pleased to see Ha-na running off to live happily, but Ma herself remains unchanged. The kids went through hell and back and really worked through problems to develop and grow as characters. The parents and other teachers did as well. But the main character, Ma Yeo-jin was as stagnant as ever. The interest in her was purely derived from the mystery of her character.

As for the acting in the show, it was incredibly strong. The children carried the show. Their talent is absolutely baffling as was their ability to remain on par with Go Hyun-jung. She was magnificent as the mysterious teacher who only rarely showed a crack in her stern facade. Watching her walk into a classroom made my heart race because I was never sure what to expect from her. She held this viewer's attention as strongly as her character held her childrens' attentions. In the last shot of the drama, she smiled, and it melted the stonewall between her and the world. It was a pretty powerful moment. 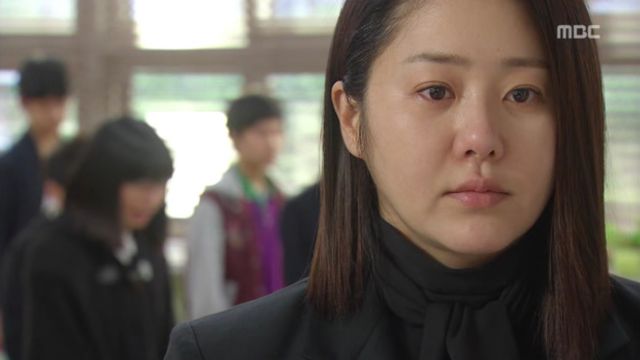 Ma leaving the class for the last time

There are the kids who came into the drama cheerfully, and then showed us such convincing responses to stress and friendship. All of them show promise for the future of filmed art. The child actors had just as much responsibility as the adult actors. On top of that, they had to come together as a cast to make the classroom situations seem believable. They did that and created wonderful dynamics between them. Especially the leader, Kim Hyang-gi. She had chemistry with every actor on screen and was a pivotal actor in the drama, and not just because of her leading role.

In terms of filming, the camera was as unchanging as Ma Yeo-jin throughout. However, that does not mean it wasn't effective. It focused a lot on light and shadow to depict the different emotions of the children and the different goals of Ma. Even Ma's last walk down the hallways of the school mirrored her very first into it: a backlit silhouette. It was a very cool effect.

And again, as I've said before, this drama provokes thought. It forces consideration of what's important. It makes one consider how to attain one's goals. Despite all of my quibbles with the controversial plot line, I cannot say that this show was not powerful. It was extremely powerful. Each episodes forces contention with Ma Yeo-jin's teaching and with the childrens' and parents' reactions. Does that make the drama successful? I think so. Agreement with a character or message isn't everything. But stirring the viewer into active contemplation of ideas? That's what it's all about