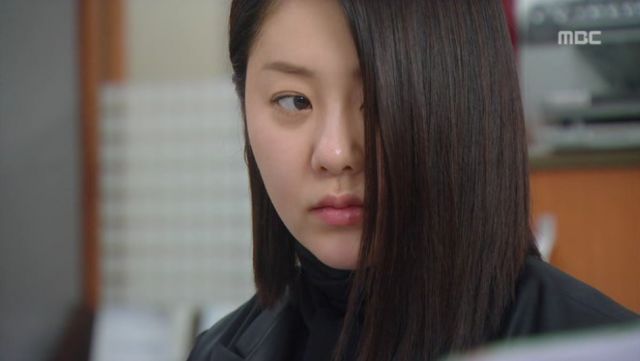 How far can you push someone before they crack? It's a question whose boundaries are tested by The Queen's Classroom. This show pushes it's characters to their breaking points, then once they are broken, pushes them some more. It kicks them when they are down and doesn't give them any time to get up. Our heroine, Shim Ha-na, learns what it means to be loyal to a friend who is terrified. That friend, Ha-ni, who is scared of her mother, her classmates, her teacher, will betray Ha-na to save her own skin.

Teacher Ma Yeo-jin tells Ha-na that her faith in friendship foolish, but Ha-na won't listen. At the end of the episode, she is locked in a gym locker and left alone. Will Ha-na continue to keep her dogged faith in her friends? 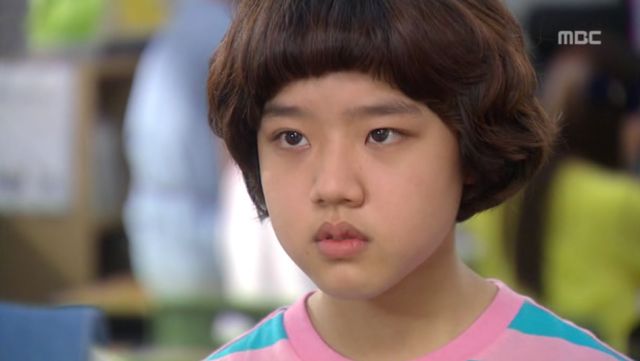 Ha-na from "The Queen's Classroom" Episode 5

After all that's happened in this episode, I'm not sure she can. If she does, then her character is a bit too perfect. It's expected she crumble, at least a little. Ha-na was accused of stealing. Subsequently, the kids in her classroom begin to pick on her, then ostracize her. At home, Ha-na has to deal with her ill sister and her parents fighting - her mother thinks her father is cheating. All of that pressure is bound to make her crack, and she does. At one point, Dong-goo is goofing off and trying to cheer her up. Aggravated, Ha-na snaps at him, regurgitating some of Ma's cruel words.

Ha-na will probably try to stave off her growing agitation, but it will be difficult. She is the center of her class's nasty attentions. They verbally harass her, destroy her school books and have now taken to physical harm by locking her up. After enduring all of this, Ha-na breaks out of the locker, twists her ankle doing so, and then finds her clothes floating in the pool. Sobbing, she tries to retrieve them, but falls in. Teacher Ma rescues her and with a surprising look of concern asks, "Do you still think I was wrong [about the kids turning on you and on your friendship]?"

It's a potent question. How far do you go to stand by a friend who has betrayed you? How far do you go to stick to your beliefs? Ha-na is socially isolated at school and at home. She has a support system of two outcasts: Dong-goo, the goofball, and Seo-hyun, the smartest kid in class. Even they are starting to doubt her stoic faith. Will she keep fighting Ma's tyranny that has spurred her classmates fear and hate? And if she does, how will she do it? This kid is worn ragged and it's only episode 5. It's going to a long fight.

Then we have lesser, but no less impactful, characters like Bo-mi, Ha-ni, Seo-hyun and Dong-goo. Bo-mi had nothing and was a loner. Now, with Ma's support, she's a pillar in the classroom. She thrives on the power, but deep within it hurts her to see her only friend Ha-na treated so badly. It hurts despite the fact that she thinks Ha-na betrayed her.

Ha-na's best friend Ha-ni is scared of disappointing her mother; she is scared of Ma's punishments; she is scared of the terror her classmates will inflict on her if they find out she stole the wallet. So she backstabs Ha-na, cutting off their friendship. Was it wrong? Yes. Can we blame her? Not really. It's war in Ma's classroom, and Na-ri is struggling to survive.

Seo-hyun is the one we know the least about. She's extremely bright, but very cynical. Her mother is too busy to participate in school activities. She is neither popular nor hated. She just is. Despite the cynicism, is something soft in her that feels for Ha-na, but she is too much of a realist to support Ha-na's fight against the teacher. Or, rather, she will help, but she doesn't much believe that they will win.

Lastly, we have Dong-goo. He likes Ha-na and tries to protect her with his buffoonery. But her sharp words hurt him more than he's willing to admit and now he questions whether or not he will continue to help her. 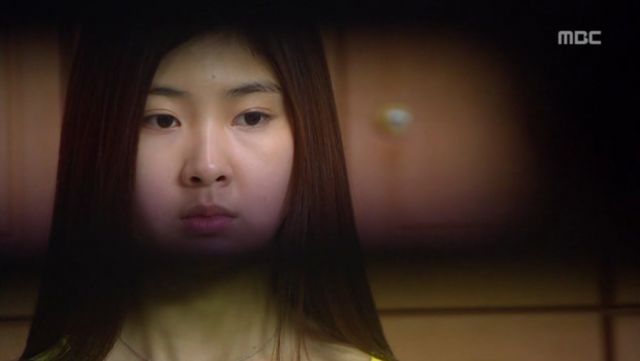 Ha-ni from "The Queen's Classroom" Episode 5

And then we have Ma Yeo-jin. In her own twisted way, she cares for her kids. She seemed almost desperate when she saved Ha-na - she really wanted Ha-na to understand that she was fighting a losing battle. There was no animosity in her eyes. Does Ma see herself in Ha-na? Does she just desire for Ha-na to avoid pain? Of all the characters in this show, I'm most curious about Ma even though my heart lies with Ha-na. What are you, Ma Yeo-jin? Why are you what you are?

The other elements of the drama continue to be stellar. The music is finely tuned to the emotional beats of the plot. J-Rabbit croons out the students' sorrows. SHINee's ending song speaks of Ha-na's seemingly ineffable optimism. The orchestrated score lines up with the dialogue beautifully. The camera work is just as finely executed and just as detailed. Moments of connection or severe contention between characters are shown by contrasting close-up shots with wide pans of scenery. When Ha-na is comforting a friend, the camera focuses on their faces, then jumps back to show us the pair of girls, huddling together in the rain, surrounded by trees. It's simply awesome in the truest sense of the word.

But the heart of the drama lies in the story. It's riveting and terrifying. The need to know how these kids deal with the situation is intense, but the fear of watching them suffer may be even greater. And still, we watch...