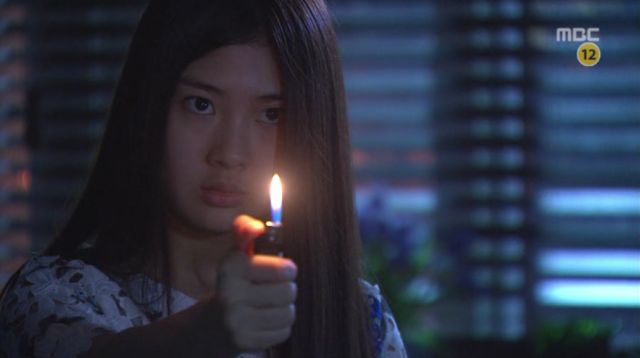 It happened. Someone broke. Na-ri completely snapped and went off the deep end. It was horrifying, yet amazing. Lee Young-yoo as Go Na-ri carried this episode on her small, but very capable shoulders.

Na-ri has been bullying Ha-na and Bo-mi in attempt to take the limelight off of herself. She stole one friend's wallet and took secret swimsuit photos of another and blamed both incidents on Ha-na. As a result, Ha-na has been wrongfully terrorized and ostracized. I've been waiting for Ha-na's name to be cleared, but I've also feared it, just as Na-ri has. If Na-ri comes clean, the animosity of the kids will turn on her. Her rich, demanding, school board mother will be disappointed. Ma will inflict some unknown punishment.

Ha-na's name does get cleared near the end of the episode. She confronts Na-ri during a cleaning field trip to a museum. She'd just caught Na-ri vomiting and knows that Na-ri must be feeling stress. Na-ri, however, doesn't want to hear it and starts to tell Ha-na that she's a fool for taking the blame and still considering them to be friends. As she admits her wrongs, the entire classroom hears from the stairwell. It's such a relief to see angry eyes turned away from Ha-na, but now they're turned on Na-ri. When they confront her, it's during a fancy lunch paid for by her mom. Na-ri is overwhelmed and runs away.

It's crazy how happy I am that Na-ri was caught and is paying the price; but it's scary how guilty I feel for enjoying it. It's schadenfreude to the fullest degree. It's also part of the dilemma that the show addresses and it's making not only characters feel it, but the viewer as well. Also, the resolution of bullying Ha-na wasn't the least bit satisfying because it was undercut by Na-ri's turn in the fire - that keeps the tension in the show and then exacerbates it. 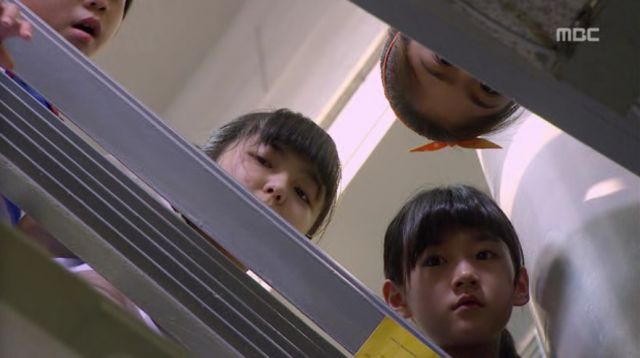 The only person who seems to get through to Teacher Ma Yeo-jin is the principal who spends her days caring for the school's foliage. She advises Ma that her Machiavellian style of teaching may not be worth the results if the kids get hurt in the process. It would be more helpful for the kids if the principal would say what she means rather than speaking in metaphors. She is aware of Ma's methods and the effects on the kids, so why doesn't she do something? She has the power.

But then, Ma's results are the only things that the school board and the parents look at. Her class is performing the best and the other classes are considered to be falling short. It's infuriating that the parents and teachers fall for Ma's result-oriented teaching torture and gloss over the fact that the kids are suffering. It's obvious a comment on Japanese and Korean education culture. The focus is on grades while kids make themselves sick trying to live up to societal expectations.

I do love the glimmer of hope that shines through despite the darkness. Ha-na's loyalty to her friends and her belief in friendship is slowly drawing wounded souls back to her side. Because of her other people can smile. Kids are the future of the world and Ha-na is working to bring a new future for herself and her classmates. When Na-ri is found out as the real criminal, Ha-na encourages the others not to treat her like an outcast as they did with Ha-na. She's trying to stop the cycle. She reaches out again to Bo-mi who, after some struggle, takes Ha-na's hand and rekindles the friendship. Good things can come from bad situations. It just takes that one person to start the ball rolling.

Although I enjoy the psychological games and watching them happen, I'm waiting to see Ma fail and realize she is wrong. Public school teaching is not a mission. It is a job that allows one to give back to society, not breed jaded children to punish it. How long can this show make Ma torture these kids without having her be punished for her actions? Or at least be enlightened? Or at least telling us why she's doing what she's doing? We're hitting the halfway mark where 16 episode dramas usually go through some kind of story shift. I'm hoping we focus more on Ma and why she's psycho. 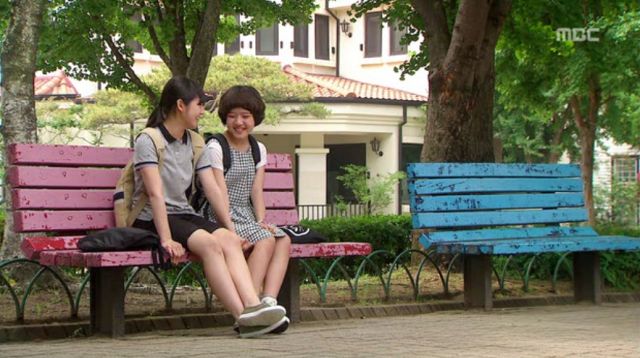 Bo-mi and Ha-na from "The Queen's Classroom" Episode 7

At the end of the episode, Ha-na and her troop of misfits find Na-ri at school, pouring gasoline all over the tables and chairs and books in the classroom, ready to burn away the school that made her miserable. The rest of the class joins them - then, Ma shows up. Na-ri is deranged and unstable, waving a lit lighter in a deadly threat. The pressures from school and her mother and society have gotten to her. It's impossibly difficult to be the best. She blames Ma for her troubles. When the lighter's flame goes out, Na-ri reaches for a blade and swings it at Ma who grabs the blade with her bare hand.

I had to pause at that moment. This woman is certifiable. The production team hit us with her strong character from the get go, and then continued to make her more and more intense. I don't know if I can handle anymore.

Then, when I think Ma can't get any crazier, she tells Na-ri that the entire situation is her fault for not refusing Ma's request to be her spy. The woman is crazy and her tactics are effective because no one knows what she will do next. She's like an abusive husband - we never know when she'll explode. It's getting to the point where someone needs to not only fight back, but stop her. Stop the madness.