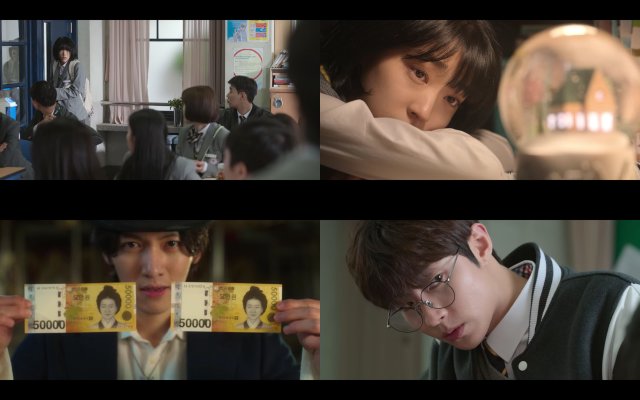 Ji Chang-wook has been out of circulation lately, only appearing as the villain (kind of) in the film "HARD HIT" last year. And his big 2022 debut is a bit of a baffling one. In "The Sound of Magic" Ji Chang-wook plays the enigmatic magician Ri Eul, whose exact motivations are rather unclear. But he does use one of his ominous magic tricks on an adult tormenting the lead character Ah-yi (played by Choi Sung-eun), in a show with weirdly disassociative showtunes numbers.

The sheer weirdness of "The Sound of Magic" can't be understated. Ji Chang-wook plays a variation of Willy Wonka as Ah-yi goes through moments of almost comically extreme poverty. The high school student only barely survives mostly due to the indifference of her classmates. The drama's other teenage lead Il-deung (played by Hwang In-yeop) is frustrated by Ah-yi mainly because he can't fathom how such an obviously ramshackle student is able to best him in math, when he's superior in every other subject.

Ah-yi's personal concerns are beyond those of any other character. She's left agonizing how to pay for rent, or food, or even just her damaged stockings in the face of apparent parental neglect. In one surreal musical number, Ah-yi dreams of a family life where she comes home to a functional household. Ah-yi is so distressed by immediate financial concerns mathematics as a discipline means almost nothing to her. Ah-yi just likes how it's a subject where she can, eventually, find a correct answer.

The real mystery of "The Sound of Magic" isn't what Ri Eul wants so much as whether or not he's even real or is just a figment of Ah-yi's imagination, a metaphorical representation of Ah-yi's day-to-day stress. As of the first episode, that question remains rather ambiguous. The actual plot of "The Sound of Magic" is borderline melodramatic without Ri Eul's interventions, with the drama focusing on some rather surprisingly harsh social commentary that belies its seemingly kid-friendly premise.

"The Sound of Magic" is quite enigmatic like that. I was actually left rather impressed that Ji Chang-wook would take on a project like this at all. A showtunes style musical where Ji Chang-wook metaphysically bewilders a teenage girl is not, on paper, a good fit for his brand. But judging by fan response, "The Sound of Magic" is already a bigger boon to Ji Chang-wook's reputation than "Pachinko" was to Lee Min-ho's, as the show is genuinely inventive and innovative.