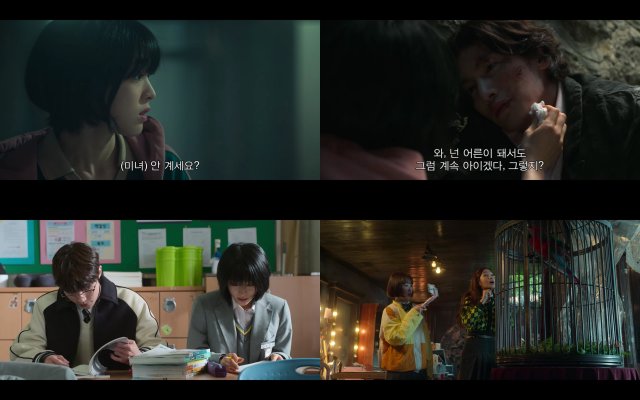 Last time on "The Sound of Magic" we Ri Eul seemingly use magical powers to disappear Mr. Kim (played by Yoon Kyung-ho), a convenience store owner who abruptly transitioned from being an understanding adult figure to one who wanted to take unseeming advantage of the lead character Ah-yi's bad financial situation. Well here, we also see Ri Eul disappear a loan shark (played by Lee Sang-tak). How Ri Eul does any of this remains unclear.

Ri Eul's actions also become increasingly tangential to the story, since so little of what happens really has very much to do with him. The second episode seems to indisputedly conclude that Ri Eul is a real person, since so many other characters aside from Ah-yi have seen him by the end. But then the actual ending is more Ah-yi's high schooler drama than anything else, with Ah-yi being the mostly oblivious victim to gossip and with us getting further snippets of her backstory.

"The Sound of Magic" remains inventively weird, with musical numbers engaging in shadow play amidst internal monologue, the lines between sound and magic deliberately blurred. But for a six episode drama, "The Sound of Magic" still has surprisingly little point even at the end of the second episode. The fate of Ah-yi's parents is played up like a mystery- except that Ah-yi and her younger sister are the more compelling characters, since they're the ones in a bad situation regardless of what happened to their parents.

Most compelling showtunes style musicals hide some darker reality behind the brighter musical numbers, with the more outlandish characters functioning best as fantastical representations of some real world social system or problem. Ri Eul is in an awkward middle space where he both seems impossible but he also seems like a random buffoon. Much like Ah-yi's parents, whether or not Ri Eul actually has magical powers is less interesting than how he functions as a reflection of Ah-yi's mental state.

Regrettably, Ri Eul doesn't really work as a reflection of Ah-yi's mental state if Ah-yi herself constantly avoids him or avoids trying to think about him, and other characters without Ah-yi's existential despair are making a more active effort to interrogate his existence. So far Il-deung is the best drawn character because he keeps making ineffective or weird gestures to try and act on his crush on Ah-yi. This has absolutely nothing to do with either sound or magic.