[HanCinema's Drama Review] "This Life Is Our First Life" Episode 12 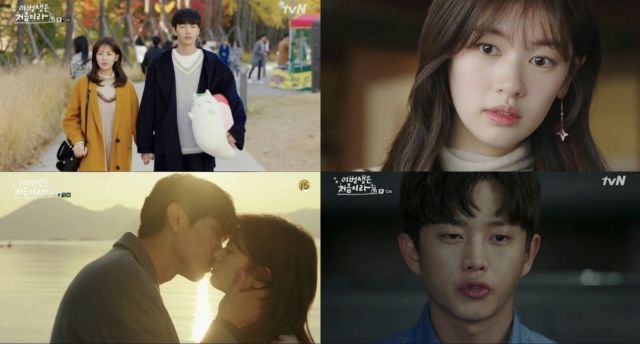 The big climactic kiss that closed off the last episode is inevitably interrupted. I mean that not in the narrative sense, but the literal. Sooner or later any couple that is kissing must stop for some reason. From there, we segue into Ji-ho's internal monologue about how real life is different than dramas. Normally such kind of meta-narration is eye roll inducing but Ji-ho does bring up a good point. How exactly is her relationship with Se-hee supposed to escalate when it's so chronically placid?

Se-hee's too scary for Ji-ho to want to act forward with him. Which is ironic, since in the face of any kind of confrontation Se-hee immediately backs down into an internal puppy whimper. It's the single best clue that the colder aspects of Se-hee's personality are largely a front, which exist for reasons we can pretty easily guess. But important hints and pivotal flashback notwithstanding, "This Life Is Our First Life" is still holding a lot back for the final episodes.

Fortunately there's still a lot else going on elsewhere. Se-hee and Ji-ho's attempt at a date is adorable. Soo-ji's visit with the brassiere artisan, while relevant in light of what's happened, comes off as a delightfully weird subplot about how some women don't like bras because of the difficulty involved in getting an appropriate size. I'm sincerely hoping all their business chat eventually evolves into a serious entrepreneurial enterprise, since starting an independent business would be the main obvious solution to Soo-ji's sexual harassment problems.

Not that Soo-ji sees these as problems, though she probably should. I like how Song-goo is so insecure and needy with her. I mean, normally those are very obnoxious personality traits, but we can see Song-goo actively trying to scale them back and not always succeeding. The way the main couples all act as an inspiration to each other to improve on their worst personal impulses is always a highlight.

Although there is one exception. Ho-rang and Won-seok, the couple who have been together the longest, actually bring out the worst impulses in one another. It's an odd paradox- by being so comfortable with each other, they don't challenge each other as they should. The worst of it is that they do finally realize that they suck at communicating, but then choose the dumbest possible way of resolving that problem. Dumb, but from their immediate perspective, logical. Which allows them to stay relatable and sympathetic.

"[HanCinema's Drama Review] "This Life Is Our First Life" Episode 12"
by HanCinema is licensed under a Creative Commons Attribution-Share Alike 3.0 Unported License.