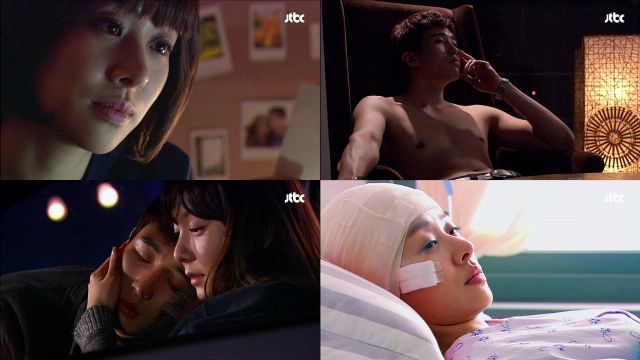 "Thorn Flower" is a daily drama in the classic revenge soap opera mode. The first three episodes are all about explaining the context to that initial crazy scene. I found it oddly satisfying that Se-mi and Hyeok-min barely even know each other. The guy literally just goes from voyeur, to pushy creep, to rapist in their only few encounters. I found this oddly believable. After all, people don't necessarily need to be pushed into becoming psychos. That just comes as second nature.

Of course "Thorn Flower" is artificial enough in its structure elsewhere. Ji-min (played by Kim Sa-hee) is actually of more immediate critical relevance than Hyeok-min. She's a rich girl with an ego. At least I can think of no other reason why she would try to gain an acting job via meritocratic competition rather than just pulling strings. Especially when Ji-min takes the whole idea of losing so personally. That women has quite the mean streak.

Se-mi is an angel by contrast- but not a placid one. I liked the comparison between Ji-min and Hyeok-min's acting. The production team betrays an obvious fondness for heroines who proactively resist evil rather than just passively accept it. So too, is Se-mi being set up to be an avenger against the generally nasty corporate villains, all of whom have obviously massive personal defects aside from just holding an unreasonable grudge against Se-mi.

But more than the plot "Thorn Flower" just has a really great style. I'm a big fan of the incredibly creepy hot tub scene, where Hyeok-min holding a wine glass and just leering at Se-mi while slouching. That's a beautiful pose that tells us more about Hyeok-min's character than a thousand words ever could. Se-mi is a bit more generic by comparison, but hey. Her most interesting character turn is yet to come. The only question is, how is she going to do it?