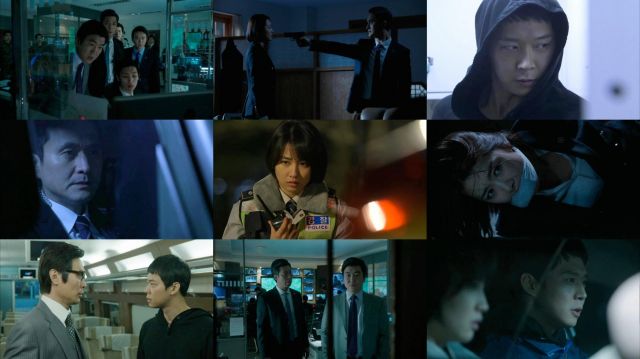 Most of the opening portion is just a huge orgy of action. Tae-kyeong is on a train and, as expected, this about the worst possible place to try and hide from a search by local authorities. So the situation very quickly degenerates into an outrageous fistfight. If the secret service agents had any doubts as to whether Tae-kyeong had seriously gone wrong, those are pretty much dispelled by the man's actions here. Word of advice- if your plan is to beat up everyone in the nearby vicinity until or unless they force you to stop, prefacing this rampage with "I'm sorry" really isn't good enough.

I'm becoming more comfortable with Tae-kyoung's outrageous action hero skills because, look, after that thing with the shoulder pinch and the car, there's not really anything else the guy can do that's more ridiculous and improbable than that. Except conceivably becoming friends with Bo-won...again. I mean geez Bo-won that guy's either killed somebody or knocked them unconscious every time you've met him. He seems kind of dangerous.

As far as characters who we actually know are dangerous, Bong-soo's standoff with Cha-yeong is effective. I especially liked how we just skipped over him making her climb out from her hiding place because why would we need to see that. No, the focus is on how much (or really how little) she knows, and Bong-soo trying to think of a way to deal with the problem that doesn't obviously and clearly telegraph his identity to everyone as being totally evil. His scheme's a clever one, but I'm a bit of a sucker for the particular solution Cha-yeong ends up with.

The mystery ends up moving at a better clip. A glimpse into past events reveals that whatever the events were that set the current plot into motion, well they're kind of vague and undefined actually. But that's good, because all the setpieces, with the gunshot and the military truck, are so clearly and deliberately scripted that it's clear they have to mean something. It's just not at all clear yet. The present day storyline makes better progress on this front because a possible outcome of the President's death has been clearly identified. It's all too clear that some sort of plan is going into motion, but the exact details are as yet unknown.

Given that we're not even really finished with the night yet it's understandable that major policy options haven't gone into effect yet. But an ominous air as yet hangs over the drama, which helps keep the going intriguing even at times the exposition can get a bit long-winded.