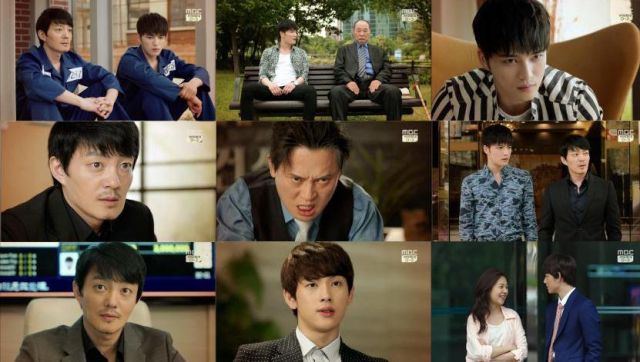 This episode marks a shift to a radical new direction for this drama. Specifically, a more generic one. Dong-soo and Yeong-dal now have to work together, unambiguously in the cause of justice, to take down Yang-ha and Bok-tae. You might be thinking that this will be somewhat difficult, what with Yeong-dal being in prison and Dong-soo with his hands tied in a similar fashion. Well, the drama helpfully skips a whole year just so we can get right back to this plot thread.

"Triangle - Drama" has been taking its time doing much of anything, and the prison was the first particularly new interesting environment we've seen since the drama started. It seemed like exactly the kind of place Yeong-dal needed to go in order to get an attitude adjustment. And he did. It's just, we didn't really get to see it. Which is just as well I guess- there's not exactly a whole lot the drama can do when half of the main has been segregated from the other half and there's only conflict on one end.

But then making the story considerably more generic really isn't really that much better. I hope you liked the love theme from last episode, becuse it plays constantly here, every single time either Yeong-dal or Jeong-hee is thinking about the other. This was an all right plot development, but it's a little early for the drama to treat this like the tragic separation of an enduring love affair. Jeong-hee only even acknowledged the possibility of a serious relationship, what, two episodes ago? Three?

This is, again, probably a necessity of the fact that the drama's tired of the ambiguous character conflict and instead wants to get some generic action. First we have good guys fighting the bad guys, and now Yang-ha is threatening to steal Jeong-hee's heart. Evidently she is not aware of the connection between Yang-ha and Yeong-dal's sudden imprisonment. This will probably come up at some point, though it's not like Yang-ha and Jeong-hee have any particularly threatening chemistry right now.

The whole episode gave me a sinking feeling about this drama- namely, that it has suddenly become incredibly predictable. We may not know the specifics of Dong-soo's plan, but it's easy enough to guess the outcome. Likewise, even though Yeong-dal clearly wants to see Jeong-won again, apparently he has to hem and haw about it. And goodness knows it's going to take forever for anyone to tell her what actually happened. I can't say I find any of this particularly exciting- the potential long term quality of "Triangle - Drama" has just taken a very sharp dip.