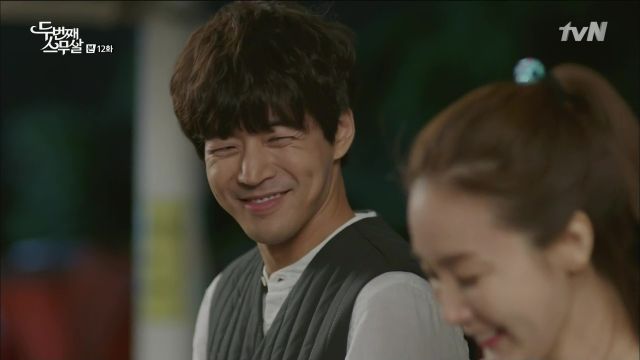 Our main characters were twenty once, but it was a long time ago. Some of the powerful, virulent emotions that overtake youngsters have begun to plague the grown "adults" of "Twenty Again". No-ra hasn't felt the flutterings of a crush in twenty years. Woo-cheol hasn't felt intrigued by his wife in just as long. Hyeon-seok is reliving the love from his youth.

These youthful emotions overtake the adults quickly, and they almost flounder save for the fact that their experience tempers them. This may actually be No-ra's problem. She feels she's done little in life and is fiercely proud of what she has done: be a stay-at-home mom. She has never really had time for the pitter patterings of love and doesn't know how to handle it. It's exactly this role of a naive housewife that Woo-cheol looks down upon. With the changes in her, he is now being forced to respect her and all that she's done for him. There is finally a push-and-pull between the couple whereas before it was completely dominated by Woo-cheol, a dynamic that mirrors relationships of the young. It is also No-ra's new twenty-something-like behavior that reminds Woo-cheol so much of the woman he fell for that brings him out of his narcissistic stupor and allows him to really see her.

No-ra's burgeoning feelings for Hyeon-seok are new to her, but they are also just plain cute. Choi Ji-woo is winsome in her puppy love and watching her unknowingly flirt and open up around Hyeon-seok is rewarding after all of his chasing and all of the emotional repression she has suffered. Although this show doesn't have as much conflict as I could, what conflict has occured until now is happily rewarded with these happier moments. After this, however, I'd like to see some real work on No-ra's broken marriage: talking about how they will live separate and about how to best insure Min-soo's future. It would be a great juxtaposition to the caring, thoughtful behavior that Hyeon-seok has displayed. Yes, he tends to run hot and cold and also acts like a total jerk. But in general, the way he treats her is as she ought to be treated - as someone of value. Woo-cheol may be starting to get an inkling of it during what may be his awakening from his caveman-like mentality.

Hyeon-seok has been slowly revealing his relationship with No-ra's grandmother, but there isn't enough tension behind this reveal to make the slow pace worth it. At this point it should all be out in the open or Hyeon-seok should have some remaining reservations with No-ra to properly build the anticipation for the big reveal. The rest of "Twenty Again" also moves a tad too slow, focusing more on the fluff than on developing themes of family, betrayal, divorce, second changes, and second loves.

The strongest point thus far is how much No-ra has changed and how she isn't afraid to call out Woo-cheol on his illogical attempts to control her. She's taking control of her life and I greatly applaud her for doing so.