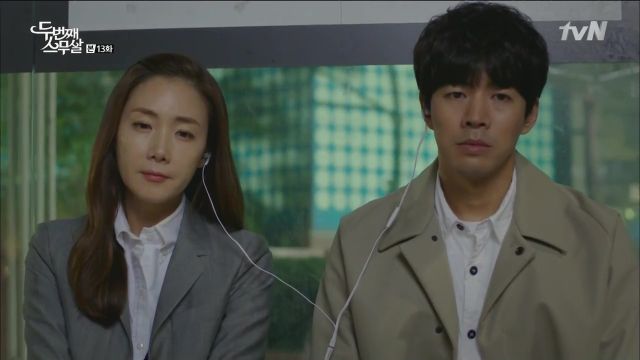 Episode 13 of "Twenty Again" focuses on realization, mostly on Woo-cheol's part. For nearly the entirety of his relationship with No-ra he has tried to mold her and their life to cater to his lofty career aspirations. Although his conscience pricked at him, he catered to his needs and hurt No-ra and his son on his path to achieving his goals.

When Woo-cheol and No-ra met, he went out of his way to care for her and impress her. But her youthful pregnancy embarrassed him and he literally hid her away and kept her lonely in order to salvage his pride and his career. No-ra did not know how far he went in his efforts until this episode. Woo-cheol has developed a habit over their twenty years of marriage and that habit has turned into a way of thinking and a way of life for him. It is only when No-ra physically slaps him with tears in her eyes and tells him in no uncertain terms that she wants a divorce that he beings to understand how he has negatively affected her life.

It has taken a while for No-ra to build up to standing up to her husband, but she now has the strength. It's never too late to take control of one's life and make sure it is lived to the fullest. She is teaching Min-soo this through her actions and through her words. Min-soo sees how his father has manipulated and controlled the family and made their home a cold, scarily goal-oriented place. The belief that his career comes first is hurting Min-soo's romantic relationship with Hye-mi. But his mother's emancipation is forcing him to view life differently. It may not be enough to salvage his relationship, but Hye-mi isn't the most understanding person. In fact, I'd be glad to be rid of her and her incessant neediness.

As for Hyeon-seok, he is decidedly different from his teenaged self. He is confident enough to reveal his childhood love for No-ra and use it to help her understand that his attentions aren't born of pity, but of genuine admiration and belief in her as a wonderful person. Despite their childish tiffs, he is considerate, unlike Woo-cheol. They are distinctly juxtaposed characters in their style of romance, treating women, and treating people. I appreciate that he respects No-ra as a person, and cherishes her as a woman.

There is one more character who bears mentioning: Woo-cheol's other woman, Yi-jin (Park Hyo-joo). She is just as selfish and prideful as Woo-cheol. She could be used as a good parallel character for Woo-cheol, but instead she is made into the petty other woman with little development.

As this show heads into its final episodes, No-ra learns the truth of her past, the truth about herself, and the truth about how love of all kinds should be. It's not a romantic dance on the beach, but a relationship born of trust and respect. Maybe she will finally find that with Hyeon-seok, her son Min-woo, and with herself.