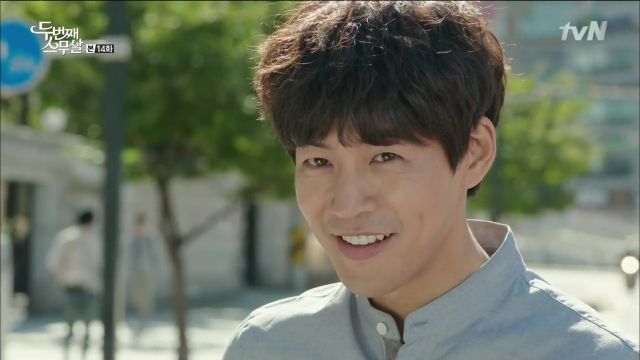 "Twenty Again" hasn't been the fastest paced drama in the lineup. A lot of what has come to pass could've been trimmed down to move more quickly. But, we've finally arrived at the meaty romantic bits and where Woo-cheol and his mistress get their just desserts.

Woo-cheol and his mistress have been playing a dangerous game, cheating behind No-ra's back and expecting everything to work out in their favor. What Yi-jin, the mistress, is discovering is that breaking up a marriage isn't as simple as a promise to sign divorce papers. Existing families, emotions, and repercussions are all involved. Her jealousy sets her on a path for revenge that would be, quite frankly, more interesting if I were more invested in her and Woo-cheol as people. Instead, her scheming is trite and unengaging and a waste of screen time. I'd prefer to see more of No-ra and her son working things out together - we had a taste of it in this episode. It was emotionally rewarding for me as a viewer, and full of great character potential. Perhaps Min-soo can come to her for advice about his needy girlfriend from whom he finally split. Or about the thoughts he's behaving about the course of his life. His character is growing up and learning to think for himself - it's fantastic!

As for Min-soo's newly lovestruck mother, she has no idea how to handle herself around Hyeon-seok now that she's developed feelings for him. She's overwhelmed by the emotions and by Hyeon-seok's keen attentions. He knows it and messes with her purposefully, like a teenage boy. I cheer for the fun antics! And for the honesty he brings to the relationship. He takes the first step and confesses to her, telling her to go for the love that she's always wanted. While this step in their relationship is rewarding, I wish it had happened earlier so we could see her learn to let herself be happy and learn to navigate dating while being a divorced parent. That's juicy writing material that hasn't yet been tapped into.

On the subject of divoce, Woo-cheol doesn't tell hi mistress he is divorced because he plans on winning back his wife. He challenged Hyeon-seok to fight for No-ra and was flatly turned down. Thank you, writers. That would've been ridiculous. But to have Woo-cheol believe a fight is what he needs to do is logical for his character. He has illogical thoughts about relationships, as does Yi-jin. She believes revenge and manipulation will get her what she wants. Instead, all she does is hurt Woo-cheol and herself. They're are in a poisonous relationship - the longer they're together, the more they hurt each other and those around them.

Heading into the last two episodes I expect for No-ra and Hyeon-seok to get together and for No-ra to start to figure out what she wants out of life now that she's been through her bucket list.