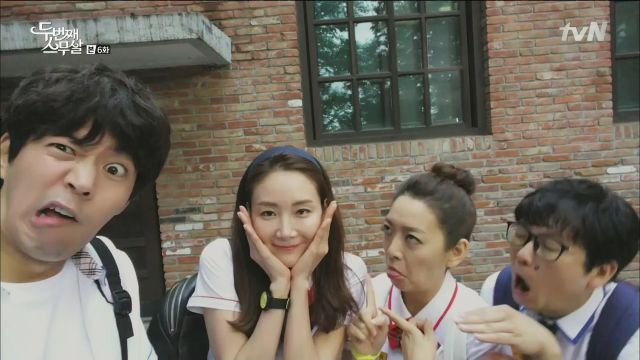 Twenty Again doesn't let anything fester for long – that is both its charm and its strength. The truth about No-ra's health is exposed, but not before we get an episode that is both fun and introspective. Each character gets to do a bit more soul searching. Or, in Woo-cheol's case, he slowly begins to learn that No-ra is no longer the complacent puppet wife that she was for the past twenty years.

No-ra's inner twenty-year-old emerges in full force as she rebels against her husband and her life as it once was. The episode is pretty heavy-handed with all of its youthful parallels between No-ra and her son, but all-in-all, it's a clever re-imagining of youthful rebellion and coupled with real marital issues. Although hateful, Woo-cheol's awakening is deftly portrayed both in writing and by actor Choi Won-young. Like No-ra, his reactions to their current marital woes are youthful and immature, pregnant with jealousy and childish possessiveness. This mirrors his son's behavior with his girlfriend, one of the few parallels with the younger man that gives Min-soo's character any gravity. Mother and son even sneak back home together after a night of clubbing (separately) and have a minor moment of bonding. I'm hoping for more of that in the future.

As we see more of the present unfold, we also learn more about the past and how Hyeon-seok fell in love with the feisty No-ra and her grandmother. We also get to see No-ra with her grandmother, which hasn't much been shown before. She loved grandmother, but doesn't seem know much about the circumstances surrounding her death. I expect that will come into play as little later. This is the time to develop romantic tensions and the romance quadrangle.

The main intrigue of the episode was not as much an intrigue as an adventure into the past. One of No-ra's wishes was to be able to dress up in her high school uniform alongside her college classmates and re-visit her high school – Hyeon-seok and her best friend made it happen. The series of scenes was full of longing looks from Hyeon-seok to No-ra, memories that surface for the audience's benefit and for character development, and a a few choice moments to amp up Woo-cheol jealousy. Choi Ji-woo and Lee Sang-yoon portray both their fully grown adult characters with such poignant naivete.

My favorite part of the episode was watching No-ra get her groove back. She sassess Woo-cheol when he's a jerk and doesn't let Hyeon-seok prevent her from doing what she wants. Although No-ra, Hyeon-seok, and Woo-cheol are interesting, I find Woo-cheol's professor girlfriend endlessly dull and a means to an end. It's a pitiable waste of actress Park Hyo-joo. We're building up to the halfway point of the drama so perhaps that means a step up in action from everyone.