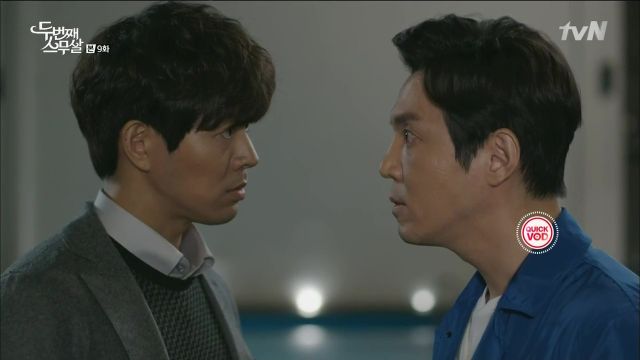 This episode of "Twenty Again" centered around how the truths of the lives of our characters ground them and affect those around them. These truths require nuanced acting, which Choi Ji-woo and Lee Sang-yoon do so well, pulling heartstrings and inspiring laughter.

No-ra has always wanted to be a dancer, and she put that dream on hold to become a mother. She has never let go of that dream. Her dance performance allowed her to both fulfill her dream as well as put it to rest. It was a dream of her youth that had been rudely taken from her by reality. There is a beautiful scene where she stands on the dark, empty stage in front of an audience of empty seats and cries for her loss. But her motherhood and her love for her son had become her new dream. With the dance performance she was able to peacefully part with her dream of dancing and wholly accept her new life. Sometimes we need to say a proper goodbye before a dream will stop haunting us.

Scenes of No-ra's, Woo-cheol's, and Hyeon-seok's past are intercut with the present so we see how much dancing has affected all three of them. It's clever editing. It also enables Hyeon-seok to come to the realization that he still loves No-ra, sending him into the awkward behavior of his teenage self for the rest of the episode. It's positively delightful watching him avoid No-ra who is now as bubbly as she was in youth, and how she tries to engage him. The return to their childhood personalities and how they are intermingled with the experience of life over the past twenty years is exactly what I'm looking for out of "Twenty Again" - especially the jubilance No-ra now feels.

The music of "Twenty Again", while sticking with the upbeat background music and crooning ballads that define romcoms, is distracting. Serious moments are undercut by uptempo pieces and would be better left alone in silence or with a darker timbre of accompaniment. One such moment is when Woo-cheol, who has rediscovered the reason he fell for No-ra after watching her dance, asserts his position as No-ra's husband. Although both men are quite serious, the music makes the situation seem like a joke when it is not.

That scene is the culmination of the start of Woo-cheol's (hopeful) realization of who No-ra is. He remembers why he fell in love with her, realizes that she didn't dance for his benefit, and realizes that another man wants her. All these things direct him back to her and force him to contend with his behavior and choices. Whether or not this situation will result in any kind of redemption for Woo-cheol we have yet to see. But certainly watching him suffer and give Hyeon-seok a kick in the pants is worth it. Without the challenge, Hyeon-seok might not reach out to No-ra.

Min-soo has discovered his parents impending divorce and although we have yet to see where that will take us, it will hopefully force the family to contend with each other and make things right between them. I do not like Min-soo's relationship with Hye-mi, but her suggestion to defy his father and ignore their college contract is what prompted him to seek out the physical contract, and thereafter find the divorce contract. It's a very utilitarian romance, but I appreciate it. Min-soo could be a great character, especially if he does more than just have realizations - especially if he does something about them.