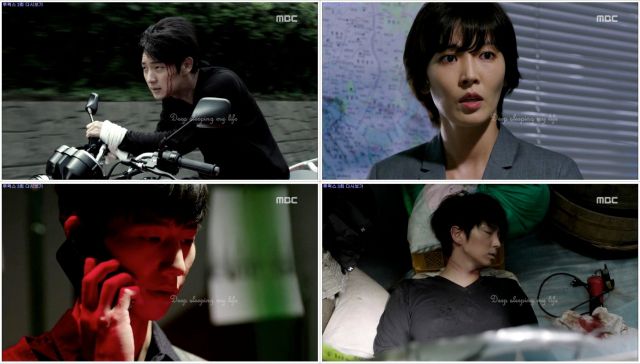 Tae-san proves this episode that, beyond a shadow of a doubt, he's a very intelligent man when properly motivated. His deductive powers are completely in character, too- his giant moment of insight comes courtesy of a twenty-year old American movie that's relevant to his current dilemma. Everything else is just him making sweeps of his environment for whatever random objects will help him evade the next checkpoint.

The conflict is well-developed here. It's a pretty common trope for good guy escapees to be trying to escape from good guy police for one reason or another. But there's always a bit of selfish individualism at play in these plots- that the wrongly accused man is an übermensch who through his sheer superiority must subvert law and order because such quaint societal conventions are incapable of dealing with the true threat at play.

None of these factors are true for Tae-san, whose ploys involve a heavy dose of humility. There's a hearty smirk after his first scheme succeeds, but everything after that makes him feel, well, like an animal, really. It's an irony that says a lot about his character. We know, and he knows, that his basically despicable lifestyle is what he needs to change to become a human being worthy of dignity and respect. And now that lifestyle is trying to kill him just when it turns out he has to live at least a little while longer, so he has no choice but to turn degrading tricks because it's the only way he knows how to successfully function.

While Tae-san's focusing on how to survive for just one more hour, the villains have started looking at the long game. While Tae-san's assumption about the car crash was incorrect, it looks like his broader concern is entirely warranted. Uncorrupted prosecutor Jae-kyeong is able to make some progress, but at the moment she's still too blinded by grief over the death of her friend to fully appreciate just how high stakes this game has gotten.

"Two Weeks" continues to be a solid thriller, presenting sequences that don't have obvious endings, and refusing to give anyone an easy way to weasel out of a difficult plot obstacle. This drama makes it exciting just watching Tae-san try to survive against the basic elements of the universe. It's almost scary wondering how he's going to deal with a confrontation with another actual character, because at this point no one is backing down from an all-out fight.