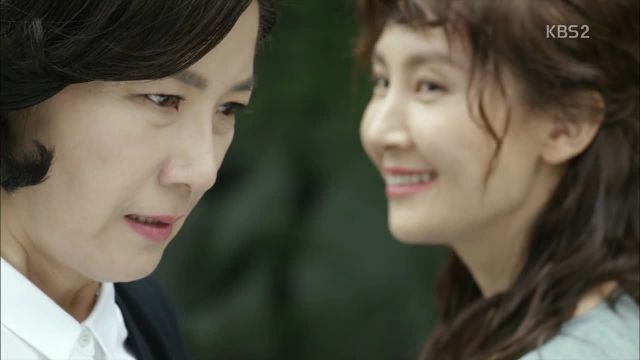 The first major showdown between Hyeon-ae and Hyeon-sook was fantastic. These two women are so powerful on screen and their rivalry is fraught with such delicious tension. It's the most engaging conflict in a show full of what are now all engaging conflicts. Some of them started out lukewarm, but they have all turned up the heat.

Hyeon-ae seems to have had a past that is quite similar to Hyeon-sook's . Both of them had teachers who looked down on them and who kept them down. Unlike Hyeon-sook, Hyeon-ae worked hard to bolster herself, doing whatever it took to climb the social ladder. Hyeon-sook collapsed into her own misery and self-pity. She didn't bother to make changes in her life until now. At one point she says, "Until I change, nothing ever will". Hyeon-ae didn't make any internal changes. She didn't look at herself as worthy of good treatment and love. She only changed her exterior. She still needs to do what Hyeon-sook has decided to do: accept herself and improve herself, and do it all by taking the right path. In a strong juxtaposition of the past and present, Hyeon-sook promises to become a better person and care for the wounded teenager within her who we, the audience, see sitting in the corner as the adult Hyeon-sook studies to better herself.

There was also a wonderful role reversal between Hyeon-sook and Hyeon-ae this episode. Hyeon-sook has the power now. It isn't the best place for reconciliation, but the element of indulgent schadenfreude cannot be denied.

One current quibble: whatever happened to Mo-ran's illness? There has been not one mention of it since she moved in with Soon-ok. In fact, her health has been fine and we haven't seen evidence of any pills. Is this going to creep up later to shake up a stagnating plot line?

I hope to see a good character arch for Cheol-hee now that his memories have returned to him and he can see how his behavior has affected his family, and Mo-ran. This could be a good venue to explore how families can heal from betrayal and make for great television at the same time.