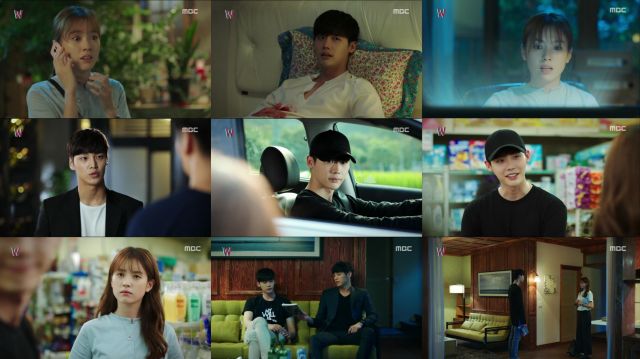 The "Real" world in "W" is starting to resemble a horror story. Granted, all there really is to worry about is Seong-moo's freaky make-up and the whole hands popping through computer screens issue, but even that is more than enough to get across that the situation is legitimately scary. Even if, as Yeon-joo quickly discovers, these are actually relatively easy problems to overcome as long as she keeps her wits about her.

Later on there's a sort of weird symmetry as Cheol makes his recovery and ends up...not really doing much of anything. It's funny how Yeon-joo (and by extension we) have this image of Cheol being utterly invincible in the face of any possible threat, yet ultimately it's So-hee and Do-yoon, the people who actually know Cheol, that have a better idea of how he really ticks. Cheol can only just barely handle having lost everything he had in life again.

The quotation marks really are necessary, because I find it increasingly hard to believe that Seong-moo and Yeon-joo alone are the drivers for the webtoon plot becoming real. It seems like there must be some sort of intelligent design at work, because even if we can find a pattern to the timing of Yeon-joo's interdimensional transportation, there's never any consistency when it comes to the place. Who decides where Yeon-joo needs to be and why?

Literally, of course, writer Song Jae-jeong is the person making those decisions. But considering how good "W" is at providing shocking plot twists that retrospectively were out in the open this entire time, I'm really hoping there's going to be some sort of larger more incredible explanation for all of this. Cheol himself seems to think this angle is a better avenue of exploration than the actual plot, and considering the corner he's trapped in, it's hard to blame him.