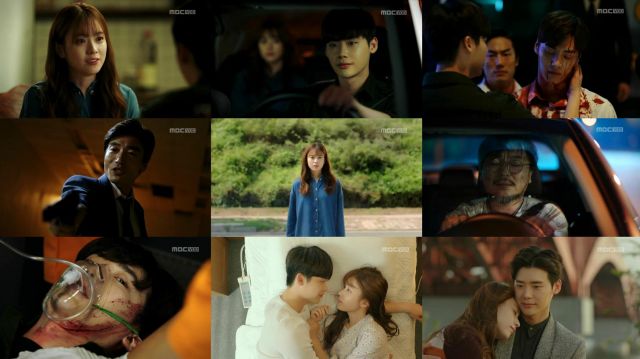 It's uncanny how "W" closes out with an exploration of loss and withdrawl that has less to do with what's happening in the actual story and more to do with how we, as viewers, come to terms with the reality of the story finally ending. Make no mistake- Yeon-joo is almost entirely a passive observer here. And whether or not Yeon-joo gets a happy ending, she is leaving us in much the same way that Cheol is leaving her. The epilogue can't really change that.

Seong-moo's role, oddly enough, is the one that proves most interesting in the end, because he ends up being the literal personification of death of the author. Seong-moo as a character has always fascinated me, because I honestly can't think of any other piece of fiction that has explicitly stated that the author can not and should not matter. Because fiction is, by definition, written by authors, it's impossible to imagine any writer simply admitting that they're not all that important.

But this is exactly what Seong-moo, and by extension Song Jae-jeong do. They're the ones who have always had the power to force the plot forward, making more characters die in the name of providing Cheol and Yeon-joo with the dramatic impetus necessary to have a conflict to struggle against instead of just being generically happy. This is why the final resolution of the internal webtoon conflict is so unsatisfying- it's just magic story writing powers being used to force the current villain to lose.

And that's all "W" ever really was, wasn't it? Consider how minor characters like So-hee always got shafted, not because they did anything wrong, but because the story was simply never about them. That's what makes the conclusion of Seong-moo's arc so strange. Seong-moo is admitting to himself that even as the all-powerful author, his needs or even the story's needs take a backseat to fulfilling the fantasy that completes the lives of Yeon-joo and Cheol.

Watching "W" has been an experience, to put it mildly. The drama started out very dynamically, begging lots of questions about the worlds these characters inhabit and why they collide. But as time went on, none of that really came to matter as "W" became a drama about the right way to find closure to a beloved drama. And now that we finally have it, does it really matter? I feel like I got what I wanted but still am not all that satisfied. Which I suppose is what all the best dramas do, in the end.