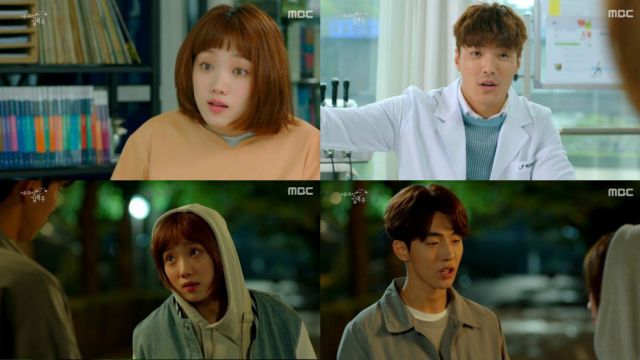 Now flush with cash Bok-joo begins her ill-advised plan to try and get Jae-i to like her by providing him with money. I'm just relieved we know that Jae-i is genuinely a nice guy who has no clue what Bok-joo's actual incomprehensible motives are. In a way it's sad watching Bok-joo make herself suffer so much for the sake of an obviously unrequited crush. And yet Bok-joo is so awash in comedic tension it never really feels like we're laughing at Bok-joo- just empathizing with how yes, we too have been that stupid at times in life.

Less funny stupidity comes in the form of Si-ho's backstory. In general the gymnasts get a pretty raw deal- while the weightlifters at least get to eat pretty much whatever they want, the gymnasts have to maintain a very low body weight in addition to all the constant repition in athletic routine. If they're catty, well, to some extent they've earned that right. Although of course Joon-hyeong has no reason to be forgiving simply because Si-ho is somewhat deserving of pity.

Joon-hyeong is starting to be a better friend to Bok-joo, though, in that he is at least kind of figuring out what she wants to do and following through on helping her even when it contradicts his general laziness. Which I find kind of remarkable, really, that serious athletes are so averse to extracurricular physical exertion. That much is just a matter of drive- and also general teen immaturity, that they lack the self-awareness necessary to see the irony.

As a fourth episode, this moment in "Weightlifting Fairy Kim Bok-joo" is rather odd in that it's more of an introductory episode than anything we've gotten so far. We even manage to end with that classic moment of realization, because while we have known this whole time what the character relationships are with each other, the characters themselves are entirely ignorant. It's easy to forget that Bok-joo and Si-ho are roommates, considerating how they almost never talk.

So overall this leaves me a little torn. On one end the cast is generally adorable, and the tone is pretty much perfect for a story where jocks constantly look for excuses to start dumb fights in between competitions. On the other end, so far the only stated goals aside from general athletic excellence are for the female leads to chase after obviously unattainable male paragons. That one woman's paragon is another's annoying hanger-on, well, that does help with the humor.