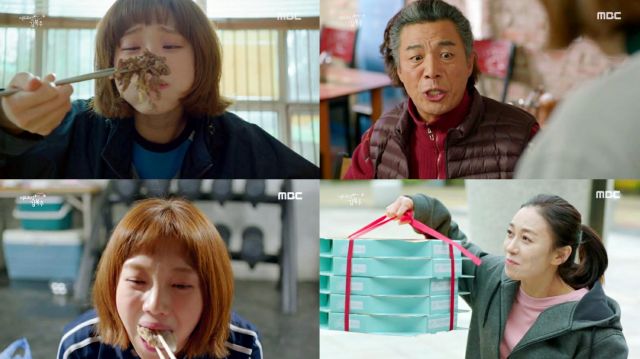 A brief sad look at Joon-hyeong's past gives us a good look at his personality- like the swimmer, always looking forward to the end of the race, doing his best to ignore distractions along the way. Si-ho likewise is the ideal rythmic gymnast, obsessed with perfection and kicking herself over every possible error, unwilling to tolerate the slightest setback. And Bok-joo...doesn't really have anything comparable actually. Weightlifters generally eat a lot, but Bok-joo spends most of this episode fighting against even that destiny.

While Bok-joo's scheme to get close to Jae-i is founded on a lot of questionable assumptions, the main blatant one here is how Jae-i is a nutritionist who does not know that Bok-joo is an athlete. This information is kind of essential, and it's a wonder Jae-i has not already noticed that Bok-joo has an awful lot of muscle mass for a musician. Never mind Jae-i, though, how exactly did Bok-joo think this was going to be explained to her coaches? It was a dubious proposition even before the new turnabout in weightlifting strategy.

The source is, naturally, just the same reason as usual. Because Bok-joo is an idiot. And so is Joon-hyeong. Really, he's the boyfriend she deserves because Joon-hyeong has this fantastic power to react to any possible situation in the least chivalric way. Their bickering chemistry really is fantastic. Director Oh Hyeon-jong has taken Lee Sung-kyung and Nam Joo-hyuk's work experience as generally obnoxious secondary characters and somehow turned it into a palatable romance.

It helps that their idiot friends are so similarly endearingly dumb. Because of course, when Bok-joo is forced to explain to someone why she hates eating so much all of a sudden, it has to be someone equally immature enough to not tell her to stop. As for Tae-kwon, he seems to just enjoy dressing in silly outfits for our general amusement. Which I suppose is not any less ridiculous than Nam Joo-hyuk taking a moment to show off his rock hard abs.

The story in "Weightlifting Fairy Kim Bok-joo" is admittedly fairly low stakes, although the characters are so relatable I don't mind so much. The cliffhanger, while technically the fault of Si-ho being surly, is really just a conversation Bok-joo needed to have a long, long time ago. So is she going to grow up? Find another way to wriggle out of the problem? Whatever Bok-joo does, I take comfort knowing that sooner or later, she will have to grow up.