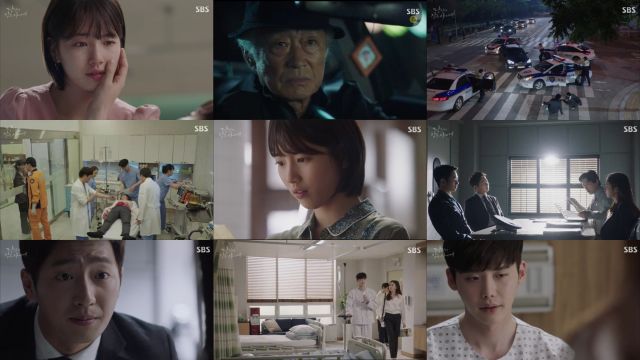 Hyang-mi (played by Park Jin-joo) works in the prosecutor's office with Jae-chan. Her only real purpose in the story is to provide office gossip commentary on Jae-chan's career path. At least, that was her only purpose. Now, Hyang-mi has decided that Jae-chan is actually super cool and awesome. This leads to some funny scenes wherein we get to see Jae-chan express this newfound love of Jae-chan in very cute ways while Jae-chan, dork that he is, accidentally encourages her.

I bring Hyang-mi's character up because the way her potrayal has shifted is indicative of how the overall tone of "While You Were Sleeping - 2017" has shifted. Hyang-mi was always a funny comic relief character, but at the beginning of the drama, her attitude represented the very real barriers Jae-chan was struggling to overcome at the prosecutor's office in order to do good work. That Hyang-mi was simply catty, rather than actually mean, helped demonstrate how Jae-chan's worst enemies were not necessarily malicious.

But now these obstacles have completely disappeared. Jae-chan has faced no apparent consequences for fumbling a murder investigation by prematurely releasing a suspect. That the suspect was in fact innocent is besides the point. Not just the press, but also the family should have been notified in advance that the murder was in fact an accident brought upon by a medical emergency. This would not have been hard. Of course, that's only one of many ways Jae-chan could have avoided being shot by the deceased woman's crazed father.

"While You Were Sleeping - 2017" tries to act like that whole situation was Yoo-beom's fault, although even that's on shaky ground. Yoo-beom could not have possibly expected multiple murder attempts were going to happen, if only because the deceased woman's father had no way of knowing where Jae-chan or Hak-yeong even were. Logically Yoo-beom would have expected the old man to go the press with this information. Why didn't Yoo-beom just cut the middleman and go to the press himself? Because...uh...

Wait, no, I got it. Because this entire plotline was just a thinly contrived excuse to get Jae-chan into the hospital so we could have a couple of episodes where he recovers and people worry about it. This is as opposed to something interesting. As usual, the only plot progression is just more pointless backstory. Does this drama even have a pretense of being about dream prophecies anymore? Because increasingly that element could be removed entirely and change nothing of consequence.

"While You Were Sleeping - 2017" is directed by Oh Choong-hwan and Park Soo-jin-II, written by Park Hye-ryeon, and features Lee Jong-suk, Suzy, Lee Sang-yeob, and Jung Hae-in.

"[HanCinema's Drama Review] "While You Were Sleeping - 2017" Episodes 19-20"
by HanCinema is licensed under a Creative Commons Attribution-Share Alike 3.0 Unported License.