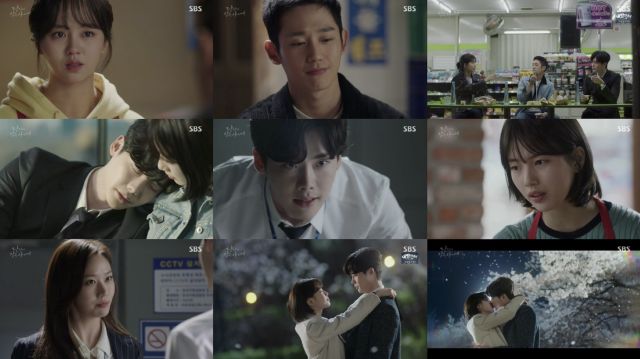 So Woo-tak really is a good guy after all. But how could we ever be in doubt? He has a disproportionate love of Batman. Also, Woo-tak has an adorable happy dog with an adorable happy name. And in general, as Jae-chan, Hong-joo, and the rest of us finally get to know the kind of guy Woo-tak is, he also comes off as the immature baby of the group. Even though all of them are, apparently, twenty-eight years old. I'm assuming the story takes place in early 2017, what with all the recurring snow.

But then it could be a lot of different years, what with the incoming time skip. Because of course, there has to be a stupid contrivance to drive the team apart temporarily. It is, admittedly, pretty easy to come up with such a contrivance when the big conflict surrounding So-yoon's case is cleared up. For So-yoon, at least, withdrawal from a stressful situation pretty much requires separation, even if that comes with constant remembrance and appreciation of all that was done for her.

Oh right, how did we get to that point? Well, mostly it's just a matter of excellent scripting. We know that Woo-tak had a premonition of something awful happening at the restaurant, and that he meant to change it bringing Jae-chan along. So what horrible thing could happen? What awful thing could Yoo-beom do when his entire shtick is using threats to preclude action? What vicious behavior could anyone do to undercut Yoo-beom's threats when he's only the messenger?

The answer to that question is awfully morbid- and yet "While Were You Sleeping - 2017" almost immediately manages to skip along to dorky comic relief. It is oddly appropriate that people who can predict the future excessively practice their own behavior in anticipation of important moments. The scenes where Jae-chan and Hong-joo make fools of themselves are oddly fascinating, as they feel like romantic comedies without the romance part. Still pretty funny.

Ah, but let's not forget the legal procedural part, which is somehow even better. Everything resolves without going to trial, because in the real world, trials are what happen when the lawyers are incompetent. And speaking of incompetence, there really is a good moral point here about how having lots of allies is not always an advantage. That, and how there's no such thing as a perfect plan, and overcockiness is a good way to unravel just about everything.

"While You Were Sleeping - 2017" is directed by Oh Choong-hwan and Park Soo-jin-II, written by Park Hye-ryeon, and features Lee Jong-suk, Suzy, Lee Sang-yeob, and Jung Hae-in.

"[HanCinema's Drama Review] "While You Were Sleeping - 2017" Episodes 7-8"
by HanCinema is licensed under a Creative Commons Attribution-Share Alike 3.0 Unported License.